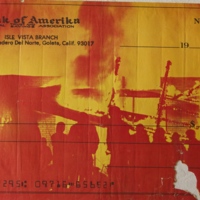 On February 25, 1970, radical New Left attorney, William Kunstler, gave a talk at Harder Stadium on the campus of the University of California-Santa Barbara. At the time, Kunstler was the defense attorney for the “Chicago 7,” who were charged with conspiracy to instigate a riot during the 1968 Chicago Democratic National Convention. During his speech, Kunstler noted recent local controversies, including the firing of Anthropology Professor, Bill Allen, as well as scattered violence between students and police in the student enclave of Isla Vista. During his remarks, Kunstler said, “I have never thought that breaking of windows and sporadic, picayune violence is a good tactic. But, on the other hand, I cannot bring myself to become bitter and condemn young people who engage in it.” The crowd whistled and applauded. Following the talk, as those in attendance walked toward a park in Isla Vista for a rally, police, who patrolled Isla Vista in what was termed a “saturation patrol technique,” arrested Rich Underwood, mistaking a bottle of wine he was drinking for a Molotov Cocktail. When Underwood resisted, police beat him. The arrival of more riot clad police set off clashes with students who shouted and threw rocks and bottles. Santa Barbara City College student and radio broadcaster, Malcolm Gault-Williams, explained, “Imagine being in Harder Stadium and having the lawyer of a high-profile national trial … draw connections between what has been happening nationally with what has been happening on campus. And then imagine a large part of those attendees leave the stadium and … watch as police not just arrest a student but beat the shit out of him.” Another student, John Riley, echoed that interpretation, saying, “Cops arrested this guy and set everything off. It was like throwing a match into a gasoline can, everybody just went nuts.”

That evening, the unrest spread, as student broke the windows of several real estate agencies, set police cars on fire, and then began targeting the Isla Vista Bank of America building, ultimately burning it down. UCSB Sociology Professor, Dick Flacks, recalled, “By evening I would guess hundreds of people were in the street and at some point people lit a trash dumpster and pushed it through the bank doors.” During the incident, several waves of riot-clad police were repelled by protesters. As one student recalled, “All of the sudden, all you heard out windows of the houses right next door was the Rolling Stones’ ‘Street Fighting Man.’”

It was the second consecutive night of disturbances in Isla Vista. The previous day, 150-200 people set trash cans on fire and vandalized local real estate offices, including the front window of the Isla Vista Bank of America branch, after the arrest of “Lefty” Bryant, a well‐known black student radical, and three other campus activists, Greg Wilkinson, Jim Trotter and Mick Kronman.

Students targeted Bank of America as a symbol of American capitalism. Bank of America had branches in Vietnam, helped fund the war industry and also side with California grape growers, rather than striking workers in the United Farm Workers. Becca Wilson, a student and editor of El Gaucho, explained, “It was the biggest capitalist thing around. It was a symbol of the corporations that benefited from war and were oppressing people all over world, in whose interest government was acting.” Another student, Greg Desilet, offered a slightly different interpretation, “The day afterwards a lot of it was rationalized as anti-war. The bank was seen to be in league with defense corporations providing armaments for Vietnam. That was the rationale given, but in my view it was more. It was locally centered with a lot of local anger toward police that had developed over time. People were just pissed off. They were really pissed off.” The Isla Vista Bank of America incident received national media attention, prompting Governor Ronald Reagan to declare a state of emergency and call in the National Guard, who made an estimated 300 arrests.

On April 18, 1970, unrest again hit Isla Vista, this time with tragic results. The Bank of America had established a new temporary branch and students again protested. Police arrived in armored trucks, dressed in riot gear and armed with tear gas. Radical activists over-turned cars and again began burning buildings. As Gault-Williams recounted, “The college’s student body president called on more moderate students to head down to the protest to try to calm some of the more radical students who were rioting and lighting fires. Kevin [Moran] and his roommates headed down to the scene. After helping put out a fire in a Taco Bell, Kevin ran to Bank of America, which had also been torched. While the students attempted to put out the fire, police officers moved in and began tossing tear gas into the crowds. During the confusion, police reported at the time, an officer’s rifle accidentally went off and fragments of the bullet struck and killed Kevin.” Initially, local police claimed a sniper bullet killed Moran, but ballistic tests showed that it came from an officer’s rifle. He was later exonerated. In June, 17 students, most well-known campus activist leaders, were indicted for the Isla Vista unrest, despite the fact that several had solid alibis. That same month, a third incident of unrest struck Isla Vista, prompting a harsh response from Los Angeles police. That police response attracted a rebuke from conservative writer, William F. Buckley, in the Los Angeles Times.

In his 1979 tell-all book, Deep Cover, former FBI agent, Cril Payne, claims the FBI was very active in Santa Barbara at the time and played a role in instigating the burning of the Isla Vista Bank of America building as a part of their COINTELPRO operations.