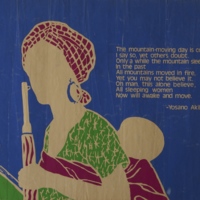 This silkscreen was made in 1972 by the Chicago Women’s Graphics Collective and features a poem by Yosano Akiko, which was the pen name of a Japanese poet, author, and activist who lived from 1878-1942. The portion of the poem excerpted and translated here was first published in 1911 in the first edition of Seito, a feminist literary magazine that announced the start of the Seitosha movement, an important early women’s liberation movement in Japan. The same year that this poster appeared, the Chicago Women’s Liberation Rock Band also set the poem to song, titled, “Mountain Moving Day.” The poster was reprinted from Liberation Graphics of Madison, Wisconsin by the Womens Graphics Collective, 852 W. Belmont, Chicago, Illinois 6065. According to Estelle Carol, the founder of the Chicago Women’s Graphics Collective:   “The Chicago Women's Graphics Collective was first organized in 1970 to provide high quality feminist posters for the growing women's liberation movement. The Collective originally used silkscreen to create their large brilliantly colored prints because it was inexpensive and in the early days, posters could actually be produced in members' apartments.   As their distribution grew, the Collective moved to a series of studios and began using offset printing for their most popular posters. Graphics Collective posters reflected the broad diversity of the women's movement. The Collective produced posters on abortion, women's health, lesbianism, women's labor, sisterhood, women's sports, women's spirituality, rape and other clearly feminist issues, but also created posters on the United Farmworkers struggle, African liberation, anti-war themes and highly personal visions that defy easy categorization.   Graphics Collective posters appeared in peoples' homes, women's liberation offices, coffee shops, women's centers, women's health clinics, labor unions, and even on the set of a popular TV sitcom. All work was done in teams of 2-4 women led by an artist-designer. The Collective wanted a new feminist art that transcended the highly individualistic "Great Men of Art" syndrome. Members would propose a poster idea and then recruit a team to actually produce it. This method incorporated the vision of the individual artist into the collective art process.  Thousands of posters were distributed worldwide during the Collective's 13 year history from 1970-1983. Today some of their best efforts are considered classics of feminist poster art.”