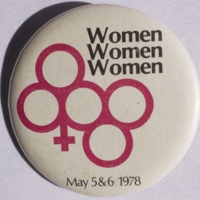 This button, which reads, “Women Women Women" on a field of white with an extended female astrological sign in pink, was created during a final mass mobilization of women’s rights organizations in 1978 as a part of an effort to gain final ratification of the Equal Rights Amendment by the states. Ultimately, the campaign was unsuccessful, as a new wave of conservative political reaction turned the tide against the amendment during the next three years.