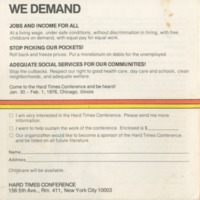 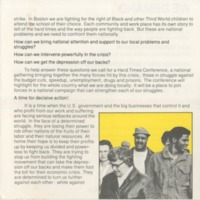 This pamphlet advertises the Hard Times Conference, which took place between January 30 and February 1, 1976, at the University of Illinois Circle Campus in Chicago. The conference was organized by the Prairie Fire Organizing Committee, with the support of a number of Weather Underground leaders and sought to challenge political cuts to social welfare programs, protest inflation and advocate for a guaranteed jobs and income program. The conference slogan was “Hard Times are Fighting Times.” This pamphlet discusses the accessibility of social services in urban neighborhoods, the importance of obtaining a living wage, and problems accruing from inflation. According to the Freedom Archive, the Prairie Fire Organizing Committee was “An anti-imperialist group that began as the Prairie Fire Distributing Committee in 1974 to distribute Prairie Fire: The Politics of Revolutionary Anti-Imperialism, written by members of the Weather Underground Organization. After its initial publication, groups sprang up around the country to discuss the book. PFOC was formally organized in 1976 and was active in the San Francisco Bay Area, Los Angeles, and Chicago until the mid-1990s. Their work embraced a broad range of issues: international solidarity with national liberation struggles in Zimbabwe, Namibia, South Africa, Nicaragua and El Salvador; and with the struggles for self-determination of Puerto Rican, African-American, Mexicano, and Native peoples inside U.S. borders; support of political prisoners; opposition to white and male supremacy and support of women’s and gay liberation.”