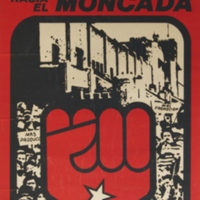 On July 26, 1953, Fidel Castro led a small group of revolutionaries in an attack on the Moncada military barracks in Santiago de Cuba. The barracks was the second largest in Cuba and had been named for General Guillermon Moncada, a heroic figure from Cuba’s War for Independence in the 1890s. The attempted coup failed, with eight killed, several more wounded and more than seventy captured and tortured by the Batista regime, including Fidel Castro’s brother, Raul. Fidel Castro initially escaped into the countryside, but was later captured and placed on trial. During the theatrical trial, Castro famously said, "You may condemn me. History will absolve me." Following the 1959 revolution, Castro would mark the storming of Moncada as the start of the struggle against the Batista regime. This poster commemorates that event.