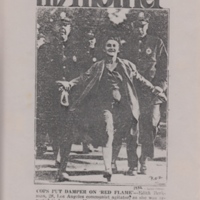 Roz Payne's mother, Edith Berkman, a Communist labor organizer, was arrested during the Lawrence, Massachusetts, textile strike in 1931. Afterward, the U.S. Department of Labor attempted to deport Berkman to Poland. Berkman was held in Boston by the U.S. government without bail for more than seven months. During that time, she developed tuberculosis and engaged in a hunger strike. Her case became fairly well-known among radical activists and labor organizers at the time, particularly on the East Coast. Seven students were arrested by police at Harvard during a protest over Berkman's case in 1932.

To the Editor of the CRIMSON,

We wish to congratulate the CRIMSON on its interest in the case of Miss Edith Berkman as evidenced by its editorial yesterday morning. We believe, however, that one important aspect of the case was neglected.

The main reason for Miss Berkman's arrest was her energetic activity as a strike-leader whom the Lawrence mill-owners wished to get out of the way as soon as possible. Her affiliation with a left-wing union was the excuse, and the U. S. Department of Labor was the means.

It is the use of the Department of Labor as a strike-breaking weapon in the hands of the mill-owners that is the crux of this situation. It is against this, and the particularly flagrant use of it in this case,--the holding of Miss Berkman for seven months without bail as a punitive measure,--that the Liberal Club's protest is lodged. By Miss Berkman's activity, the National Textile Workers' Union had conducted a vigorous and thorough prosecution of the strike, which in turn created a united front of millowners, the A. F. of L., and the U. S. Department of Labor, whose common object was to break it completely. These tactics have now become a routine practice of Secretary of Labor Doak. It is against this practice, carried on under cover of the immigration laws, that the Liberal Club protests.

The Liberal Club is not so naive as to believe in the existence of a "right" to free speech and agitation when this "right" conflicts with ruling class interest. It realizes that in an industrial crisis the machinery of the State is used to suppress by any means the activity of militant working-class unions. And it is with these unions, of which Edith Berkman was a member and organizer, that we sympathize and propose to defend. E. Y. Hartshorne, Jr. '33.

Another Letter to the Editor from Clarence Agress described the case this way:

To the Editor of the CRIMSON:

As an active participator in the recent demonstration on behalf of Edith Berkman, the writer has been much chagrined to see that the controversy centering around this affair in the CRIMSON has been too much occupied with the errors made by her sympathizers and too little concerned with the more vital issues in question.

The arrests, following the "riot" which has been outrageously exaggerated were a startling surprise to the participators who witnessed an hitherto peaceful band of cops metamorphosed into almost brutal "arrest-hunters." But aside from this, the point that should be emphasized is the attitude of the immigration authorities toward the much mistreated Edith Berkman. Mrs. Tillinghast and Sub-Commissioner F. S. Abercrombie have tried to suppress knowledge of the fact that those in no way connected with Communist or Socialist organizations are active in Miss Berkman's case and they have played the whole affair up as a "Red Riot" to give it the stigma of radicalism.

To cite another example of this gross unfairness, the writer through a personal interview with Miss Berkman has discovered that she is on a hunger strike for the purpose of focusing attention on her present position. Yet the information given out is to the effect that being a consumptive, she is on a "special diet," which, of course, obviates all beneficial results to Miss Berkman and greatly damages the sincerity of her cause in the eyes of the public. The facts in the Berkman case are too well known to repeat, but it seems that anyone who is acquainted with them must realize that Miss Berkman is being made an example of, as a warning to those who might in the future have spirit enough to protest a wage-cut.

Miss Berkman is guilty of nothing but being a leader in the Lowell Mill Strike and of membership in the National Textile Workers Union, and since when has it been a crime for labor to organize for the protection of its rights? Yet she was jailed on a false charge which was afterwards changed, held without opportunity for bail until she contracted tuberculosis, and now is awaiting possible deportation as an "undesirable alien" to Poland, where there is a strong probability that she will face the dangerous persecution of the unfriendly Fascists. Sooner or later the public must realize this miscarriage of justice and force the authorities to release Edith Berkman! Clarence M. Agress '33.

Roz Payne was extremely proud of her mother's activism and drew on her experience in Payne's own activism.