See You in Chicago 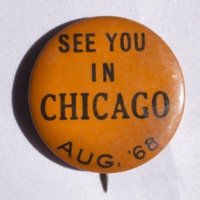 See You in Chicago

This button, which reads “See You in Chicago - Aug.’68” on an orange field, advertises planned protests by anti-war and civil rights activists at the August 1968 Democratic National Convention in Chicago. The protests degenerated into a police riot when Democratic mayor and party stalwart, Richard Daley, ordered an estimated 23,000 riot-clad police officers to attack roughly 10,000 demonstrators in and near Grant Park. The chaos outside of the convention hall, which was broadcast across the country and around the world, took place against the backdrop of growing public opposition to America’s War in Vietnam, the blossoming of the anti-war movement, increasing disillusionment with the Democratic Party and what many viewed as the slow rate of meaningful social change, as well as the shocking assassinations of Dr. Martin Luther King, Jr., and Senator Robert F. Kennedy, earlier that year. The tumultuous convention resulted in the nomination of Hubert H. Humphrey and Edmund S. Muskie as his running-mate. Republican standard-bearer, Richard Nixon, won the fall election, capping one of the more unlikely political comebacks in recent U.S. history.