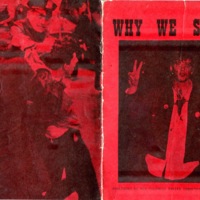 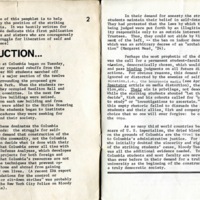 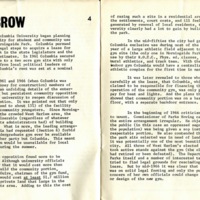 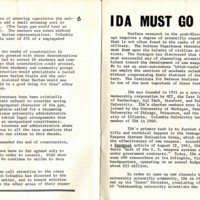 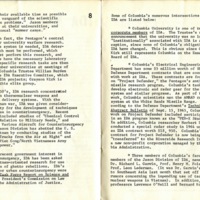 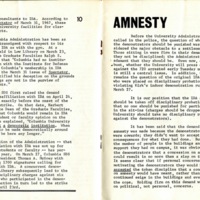 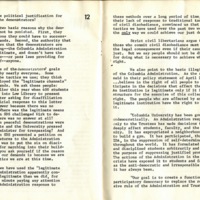 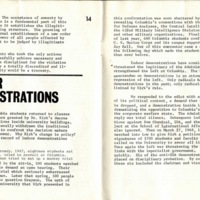 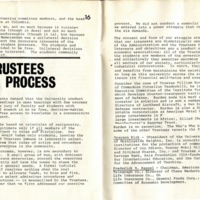 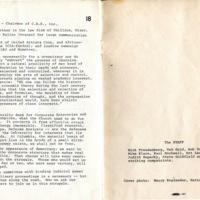 The “Siege at Columbia,” as some called it, refers to the 1968 take-over of two buildings at Columbia University by white and black student radicals. It was a part of the broader global student revolt of that year.

In early March of 1967, Columbia SDS activist, Bob Feldman, uncovered documents that linked the university to U.S. military involvement in Vietnam, sparking a year of anti-war protests on campus. Around the same time, opposition grew to a plan by Columbia to construct the Morningside Park gymnasium. Some were critical of the university’s appropriation of public park land in Harlem to build the new facility, while others labelled a proposal to create a separate “back-door” entrance for local community members, most of whom were African American and Puerto Rican, “Gym Crow,” claiming it was segregationist and discriminatory. Columbia, a major land-owner in the area, had a decades-long history of displacing local black and brown residents and applying stricter scrutiny to community members who used their facilities.

On March 27, 1968, student anti-war activists staged a peaceful demonstration inside Low Library. In response, university administration placed six activists on probation for violating a Columbia ban on indoor protests. Tensions grew between university administrators and student activists. On April 12, Columbia University president, Grayson Kirk, stated, “Our young people, in disturbing numbers, appear to reject all forms of authority, from whatever source derived, and they have taken refuge in a turbulent and inchoate nihilism whose sole objectives are destruction. I know of no time in our history when the gap between the generations has been wider or more potentially dangerous.” On April 22, Columbia SDS leader, Mark Rudd, replied, “Dear Grayson, . . . You call for order and respect for authority; we call for justice, freedom, and socialism. There is only one thing left to say. It may sound nihilistic to you, since it is the opening shot in a war of liberation. I’ll use the words of LeRoi Jones, whom I’m sure you don’t like a whole lot: “Up against the wall, motherfucker, this is a stick-up.”

On April 23, members of SDS and Columbia’s Student Afro Society (SAS) led a second attempt to protest inside Low Library, but were prevented by university police. Following the campus confrontation, activists marched to the gymnasium construction site and attempted to block work there, resulting in scuffles with local police and some arrests. SDS and SAS members then returned to campus, where they occupied Hamilton Hall, which housed classroom, as well as administrative offices. Activists detained Dean Henry Coleman (and released him 24 hours later) and issued six demands:

1) Disciplinary actions against the six originally charged must be lifted and no reprisals taken against anyone in this demonstration.

2) Construction of the Columbia gym on Harlem land must stop NOW.

3) The University must use its good offices to see that all charges against persons arrested at the gym site be dropped.

4) All relations with IDA must be severed, including President Kirk’s and Trustee William Burden’s membership on the Executive Board.

5) President Kirk’s edict on indoor demonstrations must be dropped.

6) All judicial decisions should be made in an open hearing with due process judged by a bipartite committee of students and faculty.

Soon after the occupation began, though, racial friction among the activists emerged. Black student activists requested that white radicals separate themselves from African American demonstrators. Black militants wanted to maintain a single focus on the construction of the new gymnasium, whereas white student activists also wanted to protest the broader issue of the university’s links to the war effort. In addition, members of SAS opposed the destruction of property, whereas SDS members did not. African American militants were concerned that destruction of property would play into long-standing racial stereotypes about black people. Ultimately, the two groups came to an agreement with white activists retreating from Hamilton Hall and occupying, instead, the President’s office in Low Library, along with three other buildings on campus. The siege at Columbia attracted significant national and even international attention, as well as the participation of community members, students from other campuses, and other activists, like SDS founder, Tom Hayden. On Friday, April 26, Black Power leaders, Stokely Carmichael and H. Rap Brown arrived on campus.

The stand-off between occupying student activists and the administration continued for a week, with wrangling over terms of a possible resolution. An Ad Hoc facultuy committee desperately tried to broker a deal, but student activists, administrators and local politicians consistently rejected their efforts. Despite a majority of students and local community seeming to support the occupying students, a groups of student athletes and conservative students formed what they called the “Majority Coalition” and formed a cordon around the occupied buildings in an effort to block food and water from entering the buildings to “starve out” the activists. In response, supportive faculty created a buffer between the Majority coalition and the buildings.

On Tuesday, April 30, an estimated 1,000 police entered campus to clear the occupied buildings. Fearful of a race riot in Harlem just a few weeks after civil disorder had hit the community in the wake of Dr. King’s murder, a contingent of African American law enforcement dealt gingerly with SAS activists. As SAS leader, Raymond Brown recalled, “They must have had half the black senior officers in New York on-site at Hamilton Hall, led by Assistant Chief Inspector Waithe. I think there was a great determination that they were not going to kick any black students in their butts.” Barnard SAS member, Karla Spurlock-Evans said, “The police came into Hamilton Hall and handled us very gently—not at all characteristic of police officers in general. They loaded us onto buses and took us downtown to the Tombs.” By contrast, police stormed the buildings controlled by white radicals with clubs swinging indiscriminately. According to Columbia faculty member, Michael Rosenthal, “They started beating the shit out of people. No one was resisting. I was standing next to the 64-year-old English professor Fred Dupee when he was punched in the face.” Future New York governor, Goerge Pataki, who was a Columbia law student at the time and member of the “Majority Coalition,” remembered, “From around the back of Low library comes this wave of T.P.F. guys just clubbing everybody in sight. I guess their orders were to clear the campus, which was incredibly stupid and counterproductive because many of the people outside the buildings were the anti-radicals—the pro-cop people. The radicals were all inside the buildings.” Nancy Biberman, a Barnard SDS member, stated, “I saw the university rabbi being beaten by police, and I saw random students who were beaten for just being outside on campus. These cops had been sitting on the perimeter of campus all week, pent up, waiting and waiting. As soon as they were allowed on campus, there was a mêlée. It was called a police riot, and I believe it. It was terrifying.” Police officer, Gary Beamer, agreed, saying, “The police were forced to stand outside the campus for several days and watch crimes being committed—assaults, destruction of property, and preventing students who wanted to get an education from going to class. It didn’t sit well with most of the police. So naturally, when the green light finally came for the police to go in and restore order, they were pretty eager to do it.” And Columbia student, Hilton Obenzinger, told reporters years later, “I remember vividly a cop with a frozen grin on his face going up to a girl, a Barnard student. He lifted up his very long utility flashlight and slammed it on her head. And it wasn’t just once—it was again, and again, and again. She fell down and he kept beating her.” Conflict between students and police continued into the next day. In the end, 132 students, 4 faculty members and 12 police officers were injured and roughly 700 arrested. An estimated 30 students were suspended. After another round of campus protests between May 17-22, police beat 51 and arrested 177 more students.. Following the spring demonstrations, Columbia university did scrap the Morningside Park gymnasium and severed some of their ties to the military-industrial complex.

This pamphlet, written by the Columbia Strike Committee, to “help explain and clarify the position of the striking students at Columbia.”