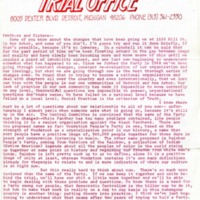 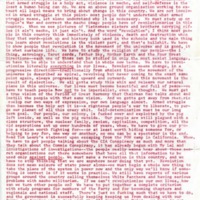 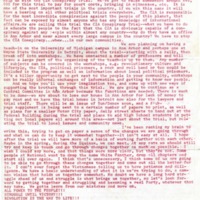 This communiqué, written by Genie Plamondon, explores the changing politics of the White Panther Party during the late-1960s.

Genie Plamondon joined the White Panther Party in the summer of 1967. An organizer and activist, Plamondon was in charge of communications between WPP chapters, as well as chapter training, an organizer of the Red Star Sisters, and also held a leadership position as “Minister of Foreign Affairs” in the organization. During the late-1960s, she traveled overseas to Vietnam as a civilian observer and eyewitness and attended Woodstock to promote the Free John Sinclair campaign.