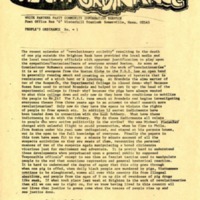 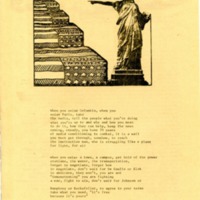 This document describes the repressive conditions in Boston toward leftist groups in the wake of the Weather Underground robbery of a bank in Brighton, Massachusetts. It also includes a poem by Diane di Prima.

In late-September of 1969, WU members Katherine Power, Susan Saxe, as well as two former convicts, William Gilday and Robert Velari, carrying handguns, a shotgun and a submachine gun. Gilday shot and killed Boston police officer Walter Schroeder when the police officer attempted to stop the robbery. The group escaped with $26,000 in cash, which they planned to use to finance an overthrow of the federal government.