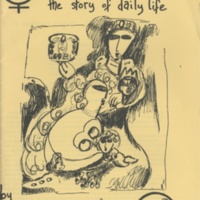 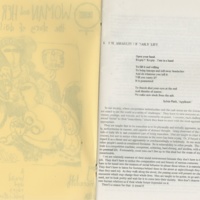 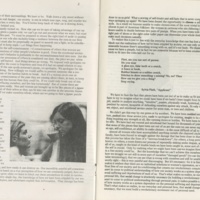 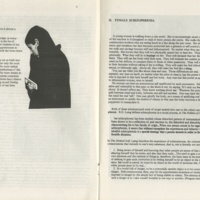 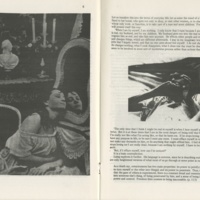 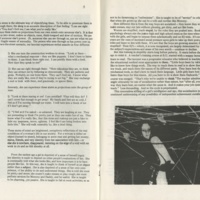 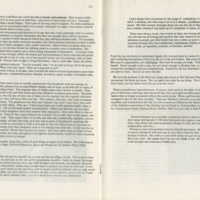 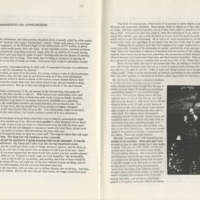 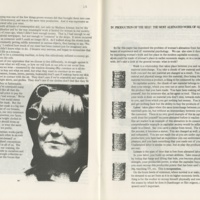 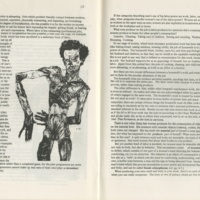 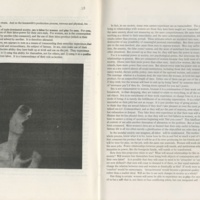 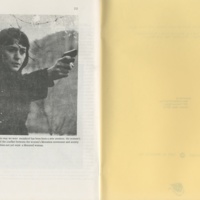 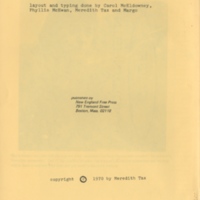 On her website, Meredith Tax offers this description of her 1970 essay, as well as a contemporary reconsideration of some of its major points:

"This four part essay, my first major work in print, is often considered a founding document of the women’s liberation movement, as well as one of the first texts to discuss sexual harassment. It was published as a pamphlet by the New England Free Press in the spring of 1970. The first two sections were reprinted in Notes from the Second Year (1970), published by the New York Radical Feminists. The same sections were also reprinted widely in the underground press after being syndicated by Liberation News Service. The editors of Notes from the Second Year edited the text rather heavily. I have restored the original pamphlet text. The quotations from Sylvia Plath are from Ariel (1965).

In rereading the essay, I am struck by the following:
How strongly I was influenced by the existential psychology of R.D. Laing, which is now completely out of fashion.
How certain I was that I could draw any necessary theory from my own experience and that of my friends—this premise lead to a number of overconfident assertions but also gave our writing and thinking a freshness and immediacy that today’s academic feminist theory lacks.
How much the world has changed. I was in violent rebellion against a middleclass suburban world in which women were expected to stay home and perform their wifely duties rather than have a public life. That world never existed for everyone and it now hardly exists at all.

How clear and brave my voice was then. I had that in common with most of the women in my cohort at the time, for this was the voice of women’s liberation in its early days: impassioned, detailed, scathing in its criticisms, sometimes making unjustified generalizations, but never dull, academic, or abstract.

And what about the section on sex? Has women’s experience of sex changed and become freer? Certainly reliable birth control—for those who have it—has been enormously liberating—and the AIDS epidemic and rise of fundamentalist religion enormously confining. Was my point of view in 1970 too rigidly Marxist, not to mention white, straight, middle class, and unable even to imagine the enormous variations in human sexuality that have since become apparent? No question about it. But as far as relations go between men and women, I don’t see that the power relations I described in 1970 have fundamentally changed, despite the marketing of women’s pleasure, good clothes, and high heels represented by “Sex and the City”—which seems, rather, to exemplify what I said about women becoming objects of consumption even to themselves."

Bread and Roses and the New England Free Press