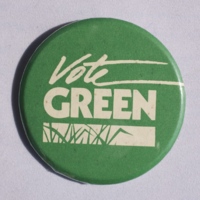 The environmental movement came of age in the 1970s and 1980s. Environmentalism initially emerged out of a myriad of local grassroots actions and organizations. Over time, some "Green" activists moved into electoral politics. This button was created by the national Green Party of the United States in the mid-1980s. In addition to environmentalism, the Green Party also advocated economic justice, racial equality and women's liberation.

Green Party of the United States