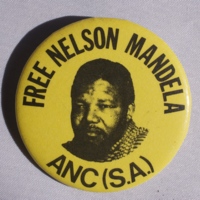 Created in 1980, this button represents a renewed international anti-Apartheid movement that picked up steam over the course of the eighties. The campaign pressed for "divestment" from the South African economy and demanded the release of South African political prisoners, particularly Nelson Mandela, leader of the African National Congress (ANC), the chief opposition party. Mandela was sentenced to life imprisonment in 1964 for his anti-Apartheid activism and became a national and international symbol of the injustice and brutality of the racist South African regime. Ultimately, Mandela was released from prison in 1990, the African National Congress (ANC) and other opposition parties were allowed to participate in the political system and the nation's first multi-racial election took place in 1994, when Nelson Mandela was elected President of a new, post-Apartheid South Africa.

New Left organizations, including the Students for a Democratic Society (SDS), had protested against the Apartheid regime in South Africa since the early and mid-Sixties.