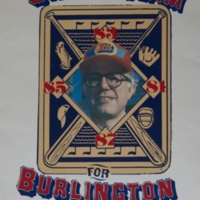 Bernie Sanders was first elected Mayor of Burlington, Vermont, in 1981, by ten votes. He subsequently won re-election in 1983, 1985 and 1987 before moving on to the House of Representatives and then the U.S. Senate. This poster was created for his 1987 re-election campaign, which he won 56% to 44% over Paul Lafayette.