Thank You for Pot Smoking 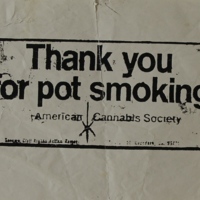 Thank You for Pot Smoking

The American Cannabis Society and its famous catchphrase, “Thank You for Pot Smoking,” was created in 1978 by Madison, Wisconsin, resident, Bob Kundert and his sons, Jeff and Eric. In a 2016 interview with the Psychedelic Times, Jeff Kundert, who is the current President of the organization, reflected on the origin of the group and its iconic slogan:

“My dad and my brother were watching TV and saw a placard on the television that said ‘Thank you for not smoking,’ and then ‘American Cancer Society’ underneath it. My brother in fun changed the ‘n’ to a ‘p’, then dad changed the word ‘cancer’ to ‘cannabis.’ We thought it was funny then, and it just stuck.”

He continued, “After I got back from Vietnam, I introduced my dad to cannabis and he really enjoyed it. We were hard working professionals, my dad owned a large construction company, and he found cannabis to be a big help in his life. He enjoyed what the youth were doing more than what the establishment was doing, which often involved things like drinking lots of alcohol.”

“Dad was worried that cannabis was being maligned and had been maligned for a long time. He thought, ‘Since people aren’t being given the truth about cannabis, why don’t we start a society just to disseminate the culture of cannabis — what people do when they’re high, what it feels like to be high, how to pass a joint correctly, things like that.’ Of course, there was pushback, but he stayed in that fight with the American Cannabis Society until his passing in the year 2000, when he was still wearing his ‘Thank You for Pot Smoking’ shirt, and was the most loved person in the nursing home with his friendliness, spunk, and humor.”

Another 2016 article in Madison’s Isthmus Magazine, further explained, “Members of the American Cannabis Society see themselves as freedom fighters on a mission to overturn nearly a century of federal marijuana prohibition. Their crusade to ‘free the herb’ isn’t so people can get high — which they do in spite of the law — but to have peace of mind while doing so. ‘The point,’ Kundert explains, ‘is that no one is going to put me or anybody else in jail for enjoying and sharing this sacred herb.’”