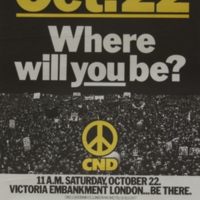 In October of 1983, the Campaign for Nuclear Disarmament (CND), a British-based anti-nuclear organization that started in 1957, held a massive anti-nuke demonstration in cities across Europe to oppose the introduction of Cruise and Pershing 2 missiles at military bases in the U.S. and across Europe, as well an increase in submarine-based Trident missiles. In all, nearly 600 new nuclear missiles were planned to be placed in European NATO countries as a part of renewed Cold War bellicosity between the U.S. and Soviet Union in the mid-1980s. The London action drew an estimated 300,000 people, bringing the city center to a virtual standstill. Labour leader, Neil Kinnock told a crowd at Hyde Park, “We believe that the only sane use for the Polaris system is to put it into negotiations to ensure our nuclear disarmament and to… force reduction in the rest of the world." In West Germany, where the United States had a large military presence and was soon to place new Cruise Missiles, roughly 600,000 people came out to demonstrations. Protests also occurred in Rome, Paris, Madrid and Brussels. In all, an estimated 3 million people took part in actions across Europe. CND chair, Joan Ruddock, remarked afterward, "The demonstration put [to rest] the notion that the peace movement is on its last legs.”

Campaign for Nuclear Disarmament, “Oct. 22, Where Will You Be?,” Roz Payne Sixties Archive, accessed December 9, 2022, https://rozsixties.unl.edu/items/show/88.