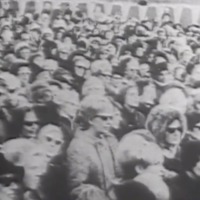 "The film was made entirely by women in San Francisco Newsreel. It was a collective effort between the women behind the camera and those in front of it. The script itself was written from preliminary interviews with the women in the film. Their participation, their criticism, and approval were sought at various stages of production." (Roz Payne Archive) "... What we see is not only natural and spontaneous, it is thoughtful and beautiful. It is a film which immediately evokes the sights and sounds and smells of working class kitchens, neighborhood streets, local supermarkets, factories, cramped living rooms, dinners cooking, diaper-washing, housecleaning, and all the other "points of production" and battlefronts where working class women in America daily confront the realities of their oppression. It is . . . a supremely optimistic statement, showing the sinews of struggle and capturing the essential energy and collective spirit of all working people-and especially that advanced consciousness which working class women bring to the common struggle." Irwin Silber, Guardian.