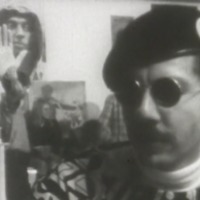 "Draft resistance organizing in Boston, a Boston organizer's trip to North Vietnam -- a G.I. coffeehouse in Texas, Newsreel's take over of Channel 13 in New York -- following the production of the Rat's special issue on Chicago -- and Chicago during the Democratic Convention, the planning and carriage out of five days of protest. Each section focuses on an organizer central to each project -- the attempt is to define the nature of commitment to "the Movement" against a backdrop of 1968's summer activities." (Roz Payne Archive)