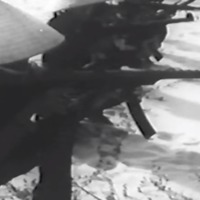 "In the summer of 1969, Newsreel went to North Vietnam. From that trip came PEOPLES' WAR. This film moves beyond the perception of the North Vietnamese as victims to a portrait of how the North Vietnamese society is organized. It shows the relationship of the people to their government -- how local tasks of a village are coordinated and its needs met. It deals with the reality of a nation that has been at war for twenty-five years, that is not only resisting US aggression and keeping alive under bombing, but that is also struggling to raise its standard of living and to overcome the underdevelopment of centuries of colonial rule. Amid much publicity, the footage was confiscated upon its return to the US. Despite this attempt at suppression, PEOPLES WAR has become one of the most sought-after films on Vietnam. Blue ribbon at U.S.A. film festival in Houston, Texas, and the Golden Bear Award, Moscow, USSR." (Roz Payne Archive)