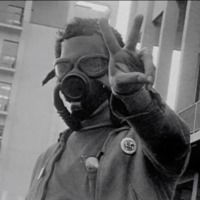 "In the spring of 1969, the Berkeley street community initiated a project to transform a barren and unused university-owned Lot into a park for the whole community to enjoy-a People's Park. Because the park threatened the control of the university and presented a challenge to the concept of private property, the police and National Guard were used to brutalize the people and destroy the People's Park. This film was made by SF Newsreel and was originally rejected as not being political enough. It was too hippie dippy so the beginning five minute rap by Frank Barneke, a peoples park politico was added on in the beginning." (Roz Payne Archive)