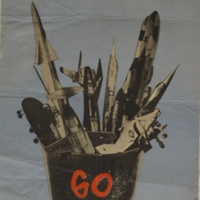 This poster was created by Cuban artist Heriberto Echeverría in 1970 to promote the global “Day of Solidarity with Puerto Rico.” The image depicts various symbols of U.S. militarism thrown into a garbage can with the words “Go Home” on it. The poster was published by OSPAAAL, the Organisation in Solidarity with the People of Africa, Asia and Latin America, the main publisher of international solidarity posters in Cuba. Notably, these colorful propaganda posters were not designed to be posted on walls within Cuba, as others were. Instead, they were folded and stapled inside the magazine, Tri-Continental, where they were then distributed internationally.

Spain ceded Puerto Rico to the United States as a part of the 1898 Treaty of Paris, which ended the Spanish-American War. Quickly, large U.S. economic interests, particularly Domino Sugar and American banks, came to dominate the Puerto Rican economy. As M.I.T. professor Noam Chomsky has written, "Puerto Rico was turned into a plantation for U.S. agribusiness, later an export platform for taxpayer-subsidized U.S. corporations, and the site of major U.S. military bases and petroleum refineries.” Nationalist and independence movements have existed in Puerto Rico from the outset of U.S. occupation, with a nationalist surge occurring during the 1930s. In 1950, Puerto Rico gained a semi-autonomous commonwealth status with the United States, but nationalists continued to push for full independence. A new period of Puerto Rican nationalism took place during the 1960s and 1970s, both on the island and on the U.S. mainland, particularly in New York City, which was home to a large Puerto Rican community. Many activists viewed the Puerto Rican independence movement as a part of the broader Third World liberation struggles of the period.