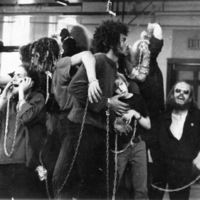 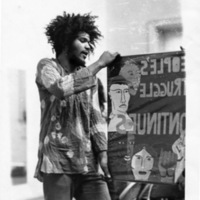 The Living Theater is the oldest experimental theater group in the U.S., founded in New York in 1947 by Judith Malina and Julian Beck. The group produces work collectively, usually with a political, often anarchist or pacifist, bent. According to the collective's website, "During the 1950′s and early 1960′s in New York, The Living Theatre pioneered the unconventional staging of poetic drama – the plays of American writers like Gertrude Stein, William Carlos Williams, Paul Goodman, Kenneth Rexroth and John Ashbery, as well as European writers rarely produced in America, including Cocteau, Lorca, Brecht and Pirandello. Best remembered among these productions, which marked the start of the Off-Broadway movement, were Doctor Faustus Lights the Lights, Tonight We Improvise, Many Loves, The Connection and The Brig."

These photos were likely taken during a visit to the University of Vermont.