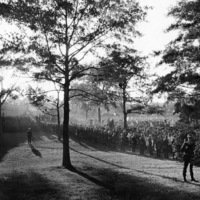 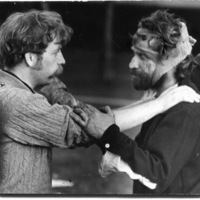 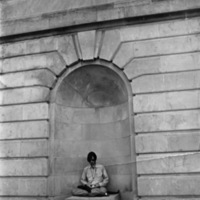 The rally began in front of the Lincoln Memorial started peacefully. Dr. Benjamin Spock, the baby specialist, author, and ardent critic of the war gave a strong speech, labelling President Johnson “the enemy.” Afterward, demonstrators marched toward the Pentagon, where some violence erupted when the more radical element of the demonstrators clashed with U.S. troops and Marshals. The protesters surrounded and besieged the military nerve center until the early hours of October 23. By the time order was restored, 683 people, including novelist Norman Mailer and two United Press International reporters, had been arrested.

On the occasion of the actual penetration of the Pentagon, there was rough stuff on both sides, but the only brutalities were committed by the marshals. When the protesters raced for the Pentagon entrance, The Nation’s reporter was in the van, not fast enough to get into the building with the six who made it, but in time to reach the doorway just as the bodies came hurtling back through, borne on a wave of soldiers. In the midst of this, he observed, one of the protesters was knocked down and lay imprisoned among the legs of the soldiers. A marshal seized this opportunity to start beating the helpless young man with all his might. and the beating continued for so long and seemed of such homicidal intent that the several newsmen caught in the crush began screaming at the marshal to quit. Finally the soldiers stopped him. The Nation’s reporter saw the marshals beating demonstrators on five occasions, four of these beatings were administered when the demonstrators were either on the ground or helpless.”