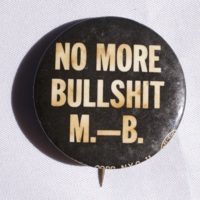 In 1969, at the prompting of feminist leader, Gloria Steinam, author, cultural critic and activist, Norman Mailer, made an outsider bid for mayor of New York City. His campaign ran as a ticket with Jimmy Breslin, the raucous New York Daily News journalist who was seeking to become the President of the New York City Council. At the time, New York was facing a growing list of problems, including rising crime rates, increasing poverty and deindustrialization, middle-class suburban flight, congestion, pollution and political stagnation. In response, Mailer, whose campaign slogans were “No More Bullshit” and “Throw the Rascals In,” set out an outlandishly bold set of initiatives. His primary proposal was the “51st State” plan, a scheme whereby the five boroughs of New York would secede from the rest of the state in a bid to secure more independence, greater political representation, resources and power. Once independent, Mailer envisioned a radically decentralized political order with the city “splintering into townships and neighborhoods, with their own school systems, police departments, housing programs, and governing philosophies." In addition, he advocated a ban on private cars in Manhattan, replacing them with cabs and a monorail system that would circle the island; a citywide free bicycle rental program; and policies that would eliminate pollution, reduce taxes, and establish full autonomy for public schools. According to campaign literature, at the collegiate level, the campaign promoted “vest-pocket campuses built by students in abandoned buildings” that would restore “a sense of personal involvement that is lost in the large university campuses.” In perhaps his most utopian proposal, Mailer urged the creation of “Sweet Sundays,” which would mandate, once a month, that all mechanical transportation stop and elevators close down so that New Yorkers could decompress from their hectic urban lives and avoid breathing exhaust fumes.

Campaign events were often chaotic. At one, Mailer quipped, "The difference between me and the other candidates is that I'm no good and I can prove it." At another, he called his own supporters “spoiled pigs.” After learning that bars would be closed on election day, Jimmy Breslin complained, “I am mortified to have taken part in a process that required bars to be closed.”

Many New Left activists and libertarians supported the Mailer-Breslin ticket. The Black Panther Party also endorsed the duo after they backed the release of Panther leader, Huey Newton. To some, the campaign was a lark, to other a serious challenge to the established order, and to others an outright offense.

In the end, Mailer finished in fourth place during the Democratic mayoral primary, edging out state Assemblyman, Charles B. Rangel, who would go on to be elected to Congress in 1970 and remain in office until 2017. Even in defeat, though, Mailer’s campaign was seen by many leftists and libertarians as an important attempt to move from the realm of ideas into programmatic politics.

Norman Mailer first gained fame in 1948 with the publication of his now-classic war novel, The Naked and the Dead, which was based in part on his own WWII experiences. In 1955, he was a part of a small group that established The Village Voice, an influential alternative newspaper located in Greenwich Village, which continued publication until 2018. Also an influential essayist, Mailer published “The White Negro” in Dissent in 1957, a controversial analysis of the “hipster” in post-war American culture.

Mailer became a ubiquitous cultural figure in the 1960s. In 1960, he published "Superman Comes to the Supermarket," an essay in Esquire on the rise of John F. Kennedy at the Democratic National Convention. He continued to see JFK as an “existential hero” for a new era. That same year, Mailer was convicted of assault for the stabbing of his wife, Adele, and served three years of probation. Mailer was also one of 29 prominent Americans who co-founded the Fair Play for Cuba Committee, which opposed the hardline anti-Castro stance of U.S. politicians and military leaders during the early-1960s. The group achieved widespread infamy in 1963, when it became public news that Kennedy assassin, Lee Harvey Oswald, was a member. In 1967, Mailer made a mark with the best-selling political book, Why Are We in Vietnam? and played an ongoing role in the anti-war movement, including signing the 1968 “Writers and Editors War Tax Protest,” a pledge to withhold tax payments to the U.S. government as opposition to the U.S. war in Vietnam. Again that year, Mailer covered the turbulent Democratic and Republican National Conventions, work that he later published as, Miami and the Siege of Chicago (1968). In that book, Mailer portrays American politics cynically as a crass and self-interested exchange of political power. Reflecting back later on the party politics of the 1960s-era, Mailer wrote, "If you played for a team, you did your best to play very well, but there was something obscene… with starting to think there was more moral worth to Michigan than Ohio State." To Mailer, there was little difference between the disgraced Richard Nixon who left the White House after the Watergate scandal and Lyndon Johnson, whose liberal Great Society was derailed by the failed Vietnam war. Along with Truman Capote, Joan Didion, Tom Wolfe and Hunter S. Thompson, Mailer is also seen as a pioneer in what came to be known as the “New Journalism,” a form of creative nonfiction that used some of the style and devices of literary fiction to write fact-based journalism. His most significant work in this vein was Armies of the Night (1968), a nonfiction novel about the October 1967 March on the Pentagon. The book won both the Pulitzer Prize and National Book Award. Mailer also wrote books about the Apollo 11 mission to the moon, a response to criticisms of him and other male authors by feminist author, Kate Millett, and an account of the 1974 “Rumble in the Jungle,” the heavyweight championship fight between Muhammad Ali and George Forman in Zaire.

In 1979, Mailer published The Executioner’s Song, for which he won his second Pulitzer Prize. The “true crime” novel focuses on the execution of Utah murderer, Gary Gilmore. His final novel, Harlot’s Ghost, published in 1991, explored the hidden history of the CIA from the end of WWII through the mid-1960s. Mailer, who also wrote drama and screenplays for films, died in 2007.

Jimmy Breslin was an outspoken journalist and novelist who was known as a tough-talking representative of working-class residents in his hometown, Queens, New York. In 1962, Breslin wrote a best-selling book on the New York Mets baseball team, Can’t Anybody Here Play This Game? In 1963, he was covering southern civil rights activism in Selma, Alabama, when President John F. Kennedy was assassinated in Dallas, Texas. While other journalists wrote stories about the fallen president, Breslin secured an interview with Malcolm Perry, the Parkland Hospital doctor who had tried to save him. He followed that up with a powerful column about Clifton Pollard, the man who dug Kennedy’s grave. As journalist David Shedden later wrote, “It’s a plainly told story -- no breathtaking sentences here -- but the style is effective in its Hemingway-esque directness. Breslin moves from the gravedigger’s perspective, to a more omniscient view of the funeral, back to the worker. We like the passage about Jackie Kennedy, its moving description of her particular, telling gestures. But the piece’s central power lies in Breslin’s juxtaposition of the cemetery workers, the small details of the scene’s sounds and sights, with the enormity of the event." From there, Breslin secured positions as a columnist for a succession of New York newspapers, gaining a reputation as a staunch opponent of corruption and injustice. Like Mailer, Breslin was seen as a pioneer of the New Journalism movement and often mixed his own experience with his journalistic reportage of political events. In 1969, he published the true-crime book, The Gang That Couldn’t Shoot Straight, about mobster “Crazy Joe” Gallo and his band of bungling baddies. The book was made into a film in 1971.

Breslin continued to be an influential writer until his death in 2017. In 1973, he wrote another novel, World Without End, Amen. In 1977, Breslin again gained notoriety for a series of compelling articles on the infamous “Son of Sam” serial killer, David Berkowitz. In response to those essays and in the midst of his killing spree, Berkowitz wrote to Breslin: “Hello from the cracks in the sidewalks of N.Y.C. and from the ants that dwell in these cracks and feed on the dried blood of the dead that has settled into the cracks.” The murderer continued, “J.B., I’m just dropping you a line to let you know that I appreciate your interest in those recent and horrendous .44 killings. I also want to tell you that I read your column daily and find it quite informative.” In 1978, Breslin received a sizable advance to co-write a book about the Son of Sam murders with Dick Schaap, titled, .44. Many viewed the book as exploitative and in poor taste so soon after the traumatic events. In 1986, Breslin won a Pulitzer Prize, in part for his writing about the AIDS epidemic in New York City, as well his broader work championing the causes of ordinary people. In later decades, he published a memoir, I Want to Thank My Brain for Remembering Me (1996), as well as a non-fiction account of a Mexican construction worker in New York who was killed on site when a building collapsed, The Short Sweet Dream of Eduardo Gutiérrez (2002), and a final book about the mafia, titled, The Good Rat (2008). Los Angeles Times columnist Jack Smith described Breslin, "like an Irish wind that has blown through Queens and Harlem and Mutchie's bar. It is a pound of Hemingway and a pound of Joyce and 240 pounds of Breslin." Following his death in 2017, Tom Wolfe called him, “incredible, the greatest newspaper columnist of my era.”