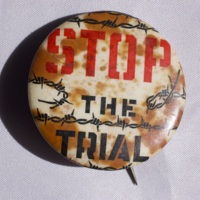 The high-profile trial, which began on September 24, 1969, and lasted five months, quickly turned into a circus. The defendants, known initially as the Chicago 8, were represented by radical attorneys, William Kunstler and Leonard Weinglass of the Center for Constitutional Rights. The judge was Julius Hoffman, and the prosecutors were Richard Schultz and Tom Foran. Bobby Seale repeatedly disrupted the trial because he could not have the lawyer of his choice, calling Judge Hoffman “racist” and a “fascist pig.” In response, Hoffman, who displayed a disdain for the defendants and the anti-war movement, more generally, bound, gagged and chained Seale to his chair in front of the jury for several days. Kunstler lambasted Judge Hoffman’s actions, saying, "This is no longer a court of order, Your Honor, this is a medieval torture chamber." Hoffman ultimately severed Seale’s case from the other seven defendants for a later trial, which never took place. He also sentenced Seale to four years imprisonment for contempt of court, one of the harshest punishments for that offense in U.S. history to that time. A U.S. Court of Appeals quickly overturned the ruling.

The trial of the seven remaining defendants, now known as the Chicago 7, became a cause celebre among New Left activists. The prosecution relied primarily on the testimony of undercover police officers and informants, who told the jury that they had heard various defendants state that they were planning to confront police during the convention and fight back against police aggression. Some claimed to have heard Froines and Weiner speak openly about making stink bombs and other incendiary devices.

According to a history of the case written for the Federal Judicial Center by historian, Bruce Ragsdale, “The defendants and their attorneys went well beyond the rebuttal of the criminal charges and sought to portray the proceedings as a political trial rather than a criminal prosecution. In their legal arguments, in their courtroom behavior, and in their numerous public appearances, they challenged the legitimacy of the court and the judge as well as the substance of the indictment. The trial became for the defense an opportunity to portray the dissent movement that had converged on Chicago for the Democratic Convention.” Defense attorneys called more than 100 witnesses to the stand, including a number of anti-war and countercultural celebrities, like Phil Ochs, Judy Collins, Dick Gregory, William Styron, Arlo Guthrie, Country Joe McDonald, Norman Mailer, Allen Ginsberg, Timothy Leary and Rev. Jesse Jackson. SDS leader, Tom Hayden, attempted to observe courtroom decorum and offer reasonable arguments to refute the prosecutions claims, but Yippie leaders, Abbie Hoffman and Jerry Rubin, exploited the trial for political theater, consistently disrupting the proceedings, dressing in costumes, eating jelly beans, blowing kisses at jurors, cracking jokes and insulting the judge. As civil rights attorney, Ron Kuby, recalled at William Kunstler’s 1995 funeral, “While defending the Chicago Seven, [Kunstler] put the war in Vietnam on trial—asking Judy Collins to sing "Where Have All The Flowers Gone" from the witness stand, placing a Viet Cong flag on the defense table, and wearing a black armband to commemorate the war dead.”

Much of the trial turned on procedural arguments that usually went against the defense counsel. Again, Ragsdale explains, “Even before the trial started, Judge Hoffman granted only thirty days for pretrial motions rather than the six months requested by the defense. The judge denied the defense attorneys’ access to government evidence obtained without a warrant and barred the defense from submitting the Lake Villa document in which Hayden and Davis set out their non- violent strategy. Judge Hoffman prohibited former Attorney General Ramsey Clark from testifying about his opposition to prosecution of demonstrators, and Hoffman sharply limited the defense lawyers’ ability to question Mayor Daley. Frequently the trial was interrupted by arguments over seemingly petty questions: Could the defendants distribute birthday cake in the courtroom? Could the defendants use the public restrooms, or should they be limited to the facilities in the holding rooms? Could the musician witnesses sing the songs they performed at demonstrations, or was the judge correct in insisting that they recite lyrics?”

At the end of the chaotic trial, the jury, made up of eleven whites and two African Americans, acquitted all seven defendants of conspiracy, but found Hoffman, Rubin, Dellinger, Davis and Hayden guilty of crossing state lines with intent to incite a riot. Froines and Weiner were acquitted of all charges. Judge Hoffman sentenced the remaining five defendants to the maximum penalty, five years in prison and a $5000 fine All seven defendants were also sentenced to prison time for contempt of court, including their attorney, William Kunstler. In a separate trial, a jury acquitted seven of the eight indicted policemen. The case against the eighth was dropped.

The contempt convictions were ultimately overturned on an appeal in 1972 and in a separate appeal all of the criminal convictions except for Bobby Seale’s were overturned. The appellate court cited the judge’s “deprecatory and often antagonistic attitude toward the defense’ as cause for the reversal. They censured Judge Hoffman and the government attorneys for their open hostility toward the defendants and their failure to fulfill “the standards of our system of justice.”

The legacy of the Chicago 8 trials was less legal than cultural. No clear legal precedents emerged from the cases, particularly with regard to the Anti-Riot Act of 1968, which was the main legal foundation for the prosecutions. Instead, the case has lived on as a cultural touchstone of a turbulent period in American history, adapted numerous times on the stage, in documentary form and as feature films.