To Whom Does Palestine Belong? 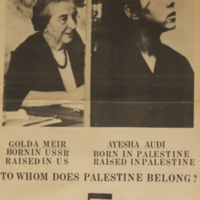 To Whom Does Palestine Belong?

This poster was created by Palestinian artist, Mohamad El Farah, in 1970, as a part of a poster series for Fatah, the Palestinian nationalist movement. It juxtaposes an image of Golda Meir with Ayesha Audi and asks, “To Whom Does Palestine Belong?”

Golda Meir was born in Kiev, but emigrated to the United States with her family when she was a small child. She grew up in Milwaukee, Wisconsin, where she was active in Zionist politics as a teenager. In 1921, Meir and her husband moved to Palestine, where she played a variety of important roles in the emergence of the new Israeli state. During the first two decades of Israel’s existence, Meir served as Labor Minister (1949-1956) and Foreign Minister (1956-66), and in 1969, after a brief retirement, she was elected as the nation’s Prime Minister, a position she held until 1974.

Less is known about Ayesha Audi. She was born in Palestine in 1944 and later became a school teacher. Audi was a pan-Arabist and ultimately joined the Popular Front for the Liberation of Palestine (PFLP), a secular Marxist-Leninist, revolutionary socialist organization founded in 1967. In the late-1960s, Fatah began to launch operations inside Israel. In 1969, Audi placed two bombs in West Jerusalem, killing two people. In response, Israeli forces destroyed Audi’s family’s home, imprisoned her and tortured her. Audi was released from Israeli prison in 1979, as a part of a prisoner swap where 76 jailed Palestinians were exchanged for captured Israeli Defense Force soldier, Avraham Amram. She then lived in Jordan and became a member of the Palestinian parliament in 1981.

Many New Left activists viewed the Palestinian liberation struggle as the vanguard of the broader Third World liberation movement of the 1960s and 1970s.