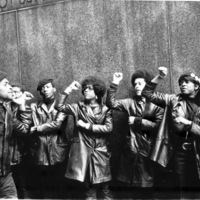 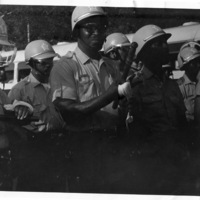 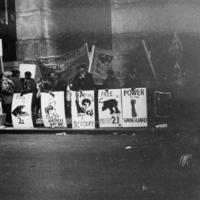 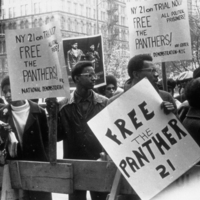 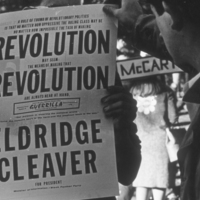 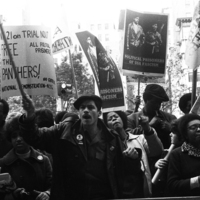 Roz Payne took these photos outside the Panther 21 trial in New York City.

Description
In April of 1969, after a lengthy, coordinated effort by local and federal law enforcement to infiltrate and disrupt the New York chapter of the Black Panther Party, District Attorney Frank Hogan indicted 21 members of the organization, claiming a widespread conspiracy to murder policemen and blow up four police stations, five department stores, railroad lines, the Queens Board of Education building, and the Bronx Botanical Gardens. Ultimately, 13 Panthers, including Afeni Shakur and Dhoruba Bin Wahad, stood trial in a case that became a cause celebre among black militants and the broader New Left. For ten months prior to the trial, the jailed Panthers were held in solitary confinement with lights on 24 hours a day and denied reading materials, recreational facilities and family visitation. Several were not given mattresses and the two female Panthers were limited to four sheets of toilet paper per day. It was also reported that prison officials harassed Panther attorneys. Famed composer, Leonard Bernstein, helped raise bail money for the “New York 21.” During the court proceedings, District Attorney Hogan referred to the Panthers as a “terrorist organization,” read from Mao Zedong’s “Little Red Book,” showed jurors the film, “The Battle of Algiers” and attempted to introduce political posters from one of the defendant’s apartment into evidence. In what was, at the time, the longest and most costly trial in New York state history, the Panthers were acquitted of all 156 charges on May 12, 1971. In the wake of the failed prosecution, local law enforcement and the FBI continued to target the New York Black Panther Party.