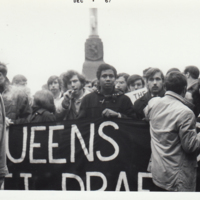 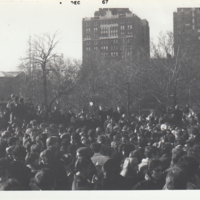 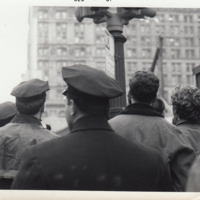 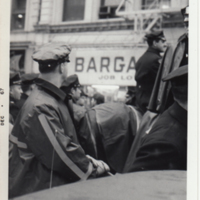 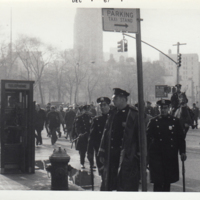 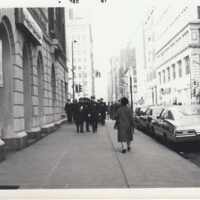 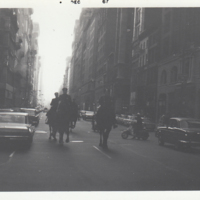 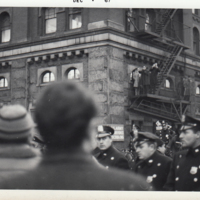 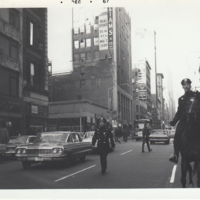 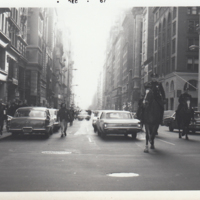 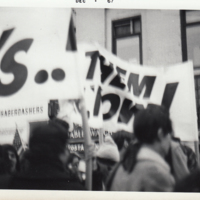 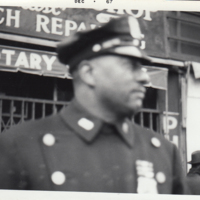 In 1967, anti-war activists shifted tactics from “protest to resistance” to the War in Vietnam, seeking more militant means on the home front to challenge U.S. policy in Southeast Asia. In October of that year, anti-war activists organized the first “Stop the Draft Week,” an effort to engage in civil disobedience at draft induction centers. Most famously, in Oakland, hundreds of activists marched on the Oakland Army Induction Center in an effort to shut it down. Police responded with widespread violence. In December, anti-war organizations organized a second “Stop the Draft Week.” In New York, Dr. Benjamin Spock and poet Allen Ginsburg led more than 1,000 demonstrators to the Whitehall induction center in New York.

The police arrested 264 persons, including Dr. Benjamin Spock and the poet Allen Ginsberg, during a demonstration yesterday between 5 A.M. and 6 A.M. by more than 2,500 antidraft, antiwar protesters at the armed forces induction center at 39 Whitehall Street.

The mass arrests, anticipated by both the demonstrators and the police, brought the only turbulent moments in a generally orderly demonstration.

But the police were alerted for a livelier protest today when a coalition of more that 40 antiwar groups plans to surround the induction center with 5,000 demonstrators who have been instructed to paralyze traffic in the area.

The Police Department issued an order marshaling all available manpower in the 28,000-man force on either an active or a standby basis, effective through Friday. About 4,000 men were expected to be on duty at the induction station today.

The center opens at 5:30 A.M., Mondays through Fridays, and that is why the demonstrators are obliged to be up long before dawn.

Yesterday's siege failed to disrupt either the induction center or the neighboring tip of the financial district.

The ranks of demonstrators thinned out before the morning rush hour. Leaders said they had no intention of trying to force a halt in the induction process; they merely wanted a "symbolic" protest. But today, they said, would be different.

Starting at 5:30 A.M., according to instructions issued by the Stop the Draft Week Committee, demonstrators will not only block streets in the area but will try to intercept inductees and persuade them to join the protest.

The police massed more than 2,500 men yesterday and defended the induction center, a faded nine-story red brick building of 1886 construction, with barricades so formidable that Dr. Spock had to plead for an opening so that he could sit on the entrance steps and be arrested.

Among those arrested were Dr. Conor Cruise O'Brien, Albert Schweitzer Professor of Humanities at New York University, and his wife Maire, daughter of the former deputy Prime Minister of Ireland, Sean MacEntee. The O'Briens were among a group staging a sit-in at Broad and Pearl Streets, one block from the induction center.

Mrs. O'Brien told newsmen that mounted policemen drove their horses into the sitting group and her husband was assaulted by policemen who followed on foot.

"They [the police] kicked Conor around quite a bit," she said.
Dr. O'Brien, who headed the United Nations mission to Katanga during the 1961 Congo crisis, insisted on medical attention, according to Mrs. O'Brien. She said the police took them both to Bellevue Hospital, where it was found that Dr. O'Brien had suffered bruises. He was discharged yesterday afternoon.

Assembling in early morning darkness, the demonstrators arrived in Peter Minuit Plaza armed with notebooks and cameras so, they explained, they could record instances of police brutality.

But the police, operating under a set of "instructions and principles" issued by Chief Inspector Sanford D. Garelik, behaved in a manner that drew praise later in the day from Mayor Lindsay.

Mayor Lindsay told a City Hall news conference that he had received a full report on the demonstration and believed it was "handled very well by the police."

The Garelik instructions warned the police to respect the rights of the dissenters so long as the demonstrators did not impede the rights and the free movement of others.

All of the 264 persons arrested - there were 171 men and 93 women - were paroled when arraigned in Criminal Court on charges of disorderly conduct. Hearings have been set from Jan. 10 to Jan. 24.

In an unusual step, those arrested were not booked at a police station but were taken directly in police vans to the Criminal Court Building at 100 Centre Street. There, close to the courtroom, the police had set up a booking desk. Equipment for fingerprinting and photographing any who might be charged with a felony was also at hand.

In addition to disorderly conduct, two of the prisoners were charged with resisting arrest. They were Tuli Kupferberg, 44 years old, of 301 East 10th Street, an editor of East Village Other, and Jonathan Miller, 20, of 120 West 106th Street.

Judge Walter H. Gladwin released all without bail but warned the defendants that if they were brought before him after participating in any other demonstrations this week "I shall have to set bail for you."

Hearings for Dr. Spock and Mr. Ginsberg will be held Jan. 10.

Dr. Spock told reporters out of court that he had been "cheerfully straight-armed" by the police when he tried to climb over a triple row of wooden horses and reach the steps of the induction building.

Reporters who saw the incident recalled that the 64-year-old Dr. Spock after failing in an effort to crawl under the barricade, mounted the wooden horses but was gently pushed back into the mass of demonstrators by policemen on the other side.

Finally, a police official showed Dr. Spock an opening at the end of the barricade. Whereupon the child doctor and antiwar agitator led about a dozen demonstrators from the picket line in the middle of Whitehall Street to the building steps. There, surrounded by policemen, they were allowed to squat on the cold stones for a few symbolic moments before they were arrested.

As soon as the van had taken them off, a second, group, this one headed by Mr. Ginsberg, was allowed to repeat Dr. Spock's performance. Mr. Ginsberg, the bearded beatnik poet, was wearing an orange batik shawl, a huge flowered tie, a rosary and a Buddhist amulet.

There were cymbals on his fingers, of the sort affected by Egyptian belly dancers, and he made a cheerful tinkle as the police hustled him to a van.

Some of those who sat on the steps went limp as policemen approached and had to be carried to the wagons while the pickets cheered.

But there was no violence here. Many of the pickets seemed middle-aged or older, and were not inclined to be violently demonstrative. One of the demonstrators, Beatrix Turner, 68, an artist, even praised the police: "I think the police behaved well; I'm full of compliments for them."

Very few Negroes were seen among the pickets.

A younger, much more militant outpouring was predicted today. Tactics "inspired" by the antidraft demonstration in Oakland, Calif., last Oct. 16 will be used, according to the sponsors. At Oakland, missiles were thrown and vehicles set afire.

But spokesmen for four of the sponsoring groups insisted that the protest today would be "nonviolent," even though it would involve "active interference with the war machine."

Meanwhile, inside the induction center, the commanding officer, Lieut. Col. James McPoland, called yesterday's demonstration "a big zero." Induction operations were normal and he predicted that the center would continue to process about 250 men daily.

Youths carrying brown envelopes containing orders to report for induction made their way unmolested through picket and police lines during the height of the demonstration. They vanished through an elevator door that bore the slogan "The Security of World Peace Starts Here."

"Somebody's gonna fight," said Pedro Anton Baez, 19, as he neared the building. "If I have to go to Vietnam, I'll go."