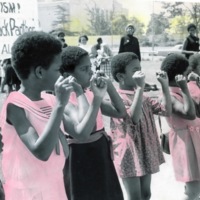 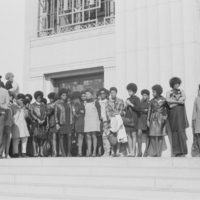 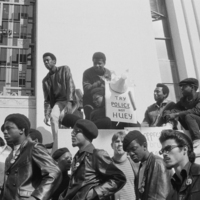 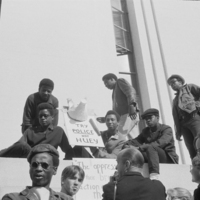 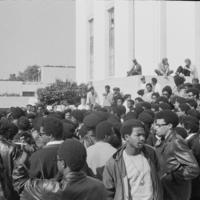 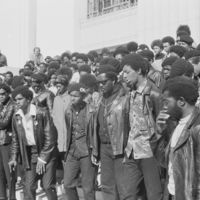 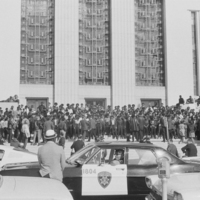 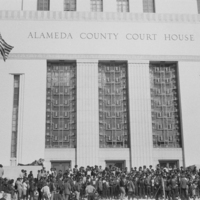 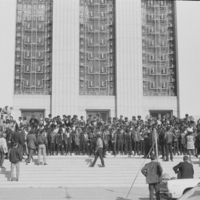 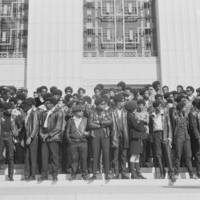 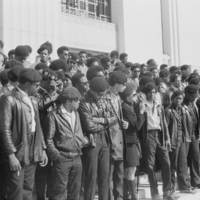 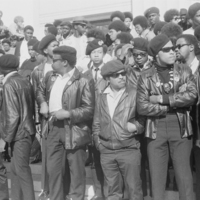 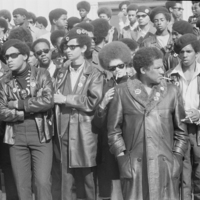 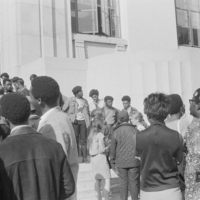 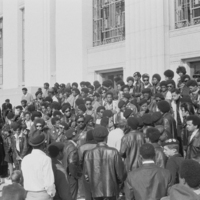 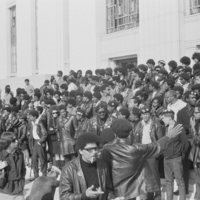 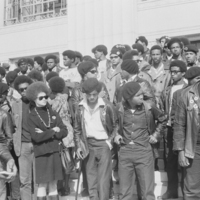 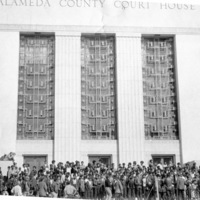 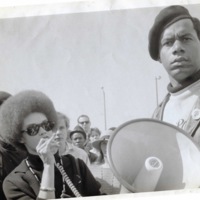 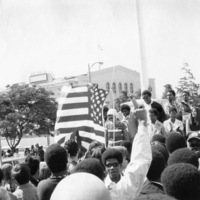 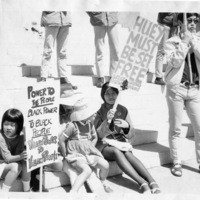 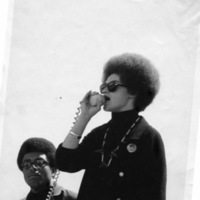 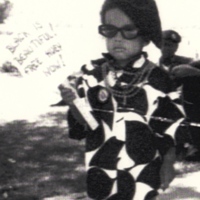 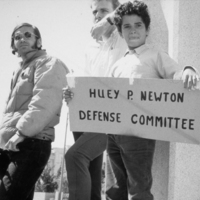 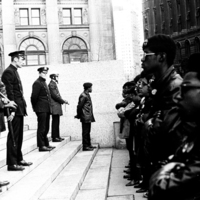 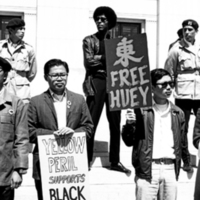 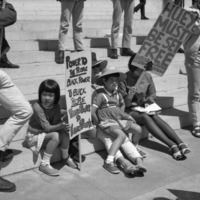 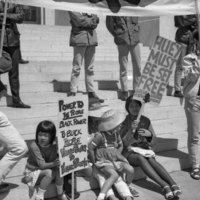 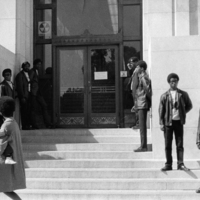 Huey P. Newton was a revolutionary black leader and co-founder, with Bobby Seale, of the Black Panther Party for Self-Defense in Oakland, California, in 1966. Newton was born in 1942 in Monroe, Louisiana, one of the most racially violent parishes in the entire South. Following WWII, the Newton family moved to Oakland as a part of the second wave of the Great Migration. Though his family moved around the Bay Area quite a bit, Newton always felt like he had food and shelter and love. He was arrested a few times as a teenager, including for gun possession and vandalism when he was 14. Newton later reflected that during his childhood in Oakland, he was often made to feel ashamed of being black. In his autobiography, Revolutionary Suicide, he wrote, “During those long years in Oakland public schools, I did not have one teacher who taught me anything relevant to my own life or experience. Not one instructor ever awoke in me a desire to learn more or to question or to explore the worlds of literature, science, and history. All they did was try to rob me of the sense of my own uniqueness and worth, and in the process nearly killed my urge to inquire.” Newton graduated high school in 1959 without learning to read, though he went on to teach himself. In 1966, he earned an associates degree from Merritt College and took classes at the San Francisco School of Law. During this period, Newton began to ask questions about his family and the world around him, which led him to get involved with the civil rights movement. At Merrett, he joined the Afro-American Association and a fraternity, Phi Beta Sigma, and helped get the first Black Studies course organized on the campus. Newton began to read political and theoretical works by radical thinkers, like Frantz Fanon, Malcolm X, Mao Zedong, Karl Marx, Vladimir Lenin, Emile Durkheim and Che Guevara. It was also at this time that he met Bobby Seale and they formed the Black Panther Party for Self-Defense in response to police brutality against local African Americans. The group was influenced by Malcolm X and Robert F. Williams, practiced a militant self-defense strategy and developed community survival programs related to employment, community health, education, nutrition, food security, prisoner’s rights, and other grassroots issues. The Panthers practiced “revolutionary socialism” and articulated their platform in a manifesto, “Ten-Point Program.” The Black Panther Party was willing to work in alliance with other revolutionary organizations, including white radicals. According to Newton, “We don't hate white people, we hate the oppressor: If the oppressor happens to be white, then we hate him.” FBI Director, J. Edgar Hoover labelled the Panthers “the greatest threat to the internal security of the country" and subjected the group to a range of repressive tactics as a part of COINTELPRO.

Huey Newton was convicted of assault with a deadly weapon for a 1964 stabbing and served six months in prison followed by a period of probation. After the end of his probation, on October 26 and 27, 1967, while out partying with friends, Newton and his compatriots were pulled over by an Oakland police officer, John Frey. When back-up forces arrived, a shoot-out ensued, leaving Frey dead and another cop, Herbert Heanes in serious condition. Huey Newton was shot in the abdomen. The circumstances surrounding the incident were and remain cloudy and contested. Convicted in 1968 of voluntary manslaughter in the killing of officer Frey, Newton was sentenced to 2 to 15 years in prison. In 1970, a California Appeals Court ordered a new trial, which twice ended with a hung jury. The prosecutor declined to retry the case for a fourth time.

Throughout these trials, the Black Panther Party organized a powerful “Free Huey” campaign, which caught on nationally and became a point of focus for the broader 1960s New Left. The campaign cast Newton as a revolutionary martyr of systematic state oppression and built him into a political icon similar to other figures at the time, like Ho Chi Minh and Che Guevara. As Gilbert Moore wrote in A Special Rage, “There was an inevitably about the Huey Newton trial which drove me fairly insane. The smell of manifest destiny was everywhere. A giant ferris wheel, spinning, controlled by a conspiracy of faceless robots. In its path lay Huey Newton." Poet Langston Hughes wrote a poem, titled, “Black Panther”:

Black Panther Party leaders recognized “that a potential black martyr could galvanize young blacks of all persuasions, in a way that they couldn’t otherwise.” Inflammatory Minister of Information, Eldridge Cleaver, said, "At this moment our leader, Brother Huey P. Newton, is being tried by old baldheaded racists who are predetermined to send him to the gas chamber. But they will carry out the sentence over our dead bodies. There seems to be little hope of avoiding armed war in the streets of California and of preventing it from sweeping across the nation. If there has to be a war, then let there be a war." Earl Anthony, author of Spitting in the Wind, wrote, "If you so much as touch a hair on Huey's pretty head, you better give your soul to the Lord because your ass belongs to the Black Panther Party." Newton himself stated, “There will be no prison which can hold our movement down…The walls, the bars, the guns and the guards can never encircle or hold down the idea of the people.” He embraced the idea that he was committing what he called, “revolutionary suicide”:

“The first lesson a revolutionary must learn is that he is a doomed man. Unless he understands this, he does not grasp the essential meaning of his life.

My fear was not of death itself, but a death without meaning. I wanted my death to be something the people could relate to, a basis for further mobilization of the community.

I expected to die. At no time before the trial did I expect to escape with my life. Yet being executed in the gas chamber did not necessarily mean defeat. It could be one more step to bring the community to a higher level of consciousness.”

After his release from prison, Newton credited the grassroots protest for his freedom, saying, “That was the true power of the people - they freed me. I was just sittin’ up in my 5x7 cell, in my 5x7 hell, up there on the 10th floor of the Alameda County Jail.

Newton’s iconic status was also double-edged. Former Panther Hugh Pearson recalled, “From the mouths of Free Huey activists, Huey began to sound like a messiah. Their enthusiasm to see Huey set free paralleled the Christian enthusiasm for the second coming…Young radicals and militants of all persuasions began preparing for the rebellion they were sure Huey would lead.” But, as actor Roger Guenveur Smith, who wrote and starred in the award-winning play, “A Huey P. Newton Story,” reflected, "Yeah they freed Huey. Then Huey came out and they wanted Huey to free them and I keep trying to tell the people, I say people, that's the true power of the people, you freed me, you freed Huey, now why don't you all go ahead and free yourself? But see, they can't do that can they? They can't do that cause the people always have to create what they call a leader and a leader is everything that the people want to be but the leader is everything that the people can never be so then when the leader fails, he's gonna fail, he's just flesh and blood, he's gonna fail, when the leader fails then the whole construction of the concept of leadership fails and then it just becomes a matter of contempt. And that's when they assassinate you and then put your image on a postage stamp so they can keep lickin' you in the grave."

The images taken here by Roz Payne were outside the Oakland Court House.