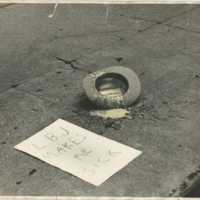 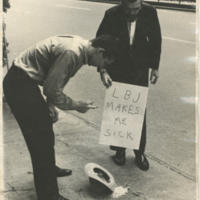 During a visit by President Lyndon Johnson, Roz Payne participated in and photographed an anti-war protest against the Democrat's war policies in Vietnam. The protesters purchased a cowboy hat like the one the Texas President often wore and procured and took a pharmaceutical used by the U.S. military to make troops vomit. According to Payne, the anti-war activists initially did not feel the effects of the medicine, so took a second dose... which, as the photos indicate, did the trick.

The images are undated, but may be from 1966. Johnson visited the city that year to stump for local and state candidates in the 1966 midterm elections.