Stop the Klan in Vermont 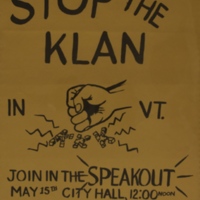 Stop the Klan in Vermont

This poster promotes an anti-Ku Klux Klan "speak-out" in Wilmington, Vermont, on May 15, 1982. According to a UPI article dated May 28, 1982, “In the first public appearance of Klansmen in Vermont since the 1920s, a 17-member delegation of the white supremacists donned their hooded robes on a ballfield and stood behind a human barrier of troopers as about 150 counter-demonstrators shouted violent anti-Klan slogans.” Two weeks later, the Klan rallied again in nearby Brattlesboro, Vermont. According to a New York Times article, dated May 31, 1982:

Two dozen white-robed members of the Ku Klux Klan paraded onto the town common in a steady drizzle Saturday for a recruitment drive, defying the anti-Klan feelings vented against them in a noisy protest two weeks ago.

About 150 spectators, some of them shouting ''Go home!'' stood behind a police line ringing the bandstand where the Klan members made speeches. State troopers trained in riot control and local law enforcement officers were also present.
On May 15, more than 150 anti-Klan protesters heckled 15 Klan members at a recruitment effort in Wilmington, 10 miles from here.