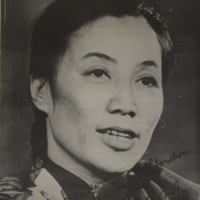 Nguyễn Thị Bình is a Vietnamese communist leader and politician who helped negotiate and signed the Paris Peace Treaty of 1973, ending the War in Vietnam. Bình was born in 1927 and joined the Communist Party in Vietnam in 1948. Her anti-colonial activism led to her imprisonment by the French from 1951-1953. During the War in Vietnam, Bình received increasing international attention, serving on the Vietcong’s Central Committee, head of the South Vietnamese Women’s Liberation Association and as the foreign minister of the Provisional Revolutionary Government of the Republic of South Vietnam, an underground government opposed to the regime of Nguyễn Văn Thiệu. Bình was seen as an international symbol of Third World women’s liberation. After the war, Bình served in a variety of roles in the Socialist Republic of Vietnam, including two terms as Vice-President from 1992-2002. This poster is signed and inscribed, “Best wishes for American Women’s Liberation.”