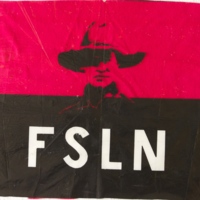 The Sandinista National Liberation Front is a Democratic Socialist political party and movement in Nicaragua named after Augusto Cesar Sandino, who led the opposition struggle against the U.S. occupation of Nicaragua in the 1930s. When the Sandinistas took power in the late-1970s, the United States, particularly the administration of Ronald Reagan, worked to undermine the regime as a part of a broader military interventionist policy against Latin America in the 1980s. The Reagan Administration funded and helped train the Contras, which sought to disrupt economic development and social programs in Nicaragua and overthrow the Sandinistas. After the U.S. Congress outlawed arms sales to the Contras, the Reagan Administration illegally continued the funding, resulting in the largest of many scandals during the Reagan years.