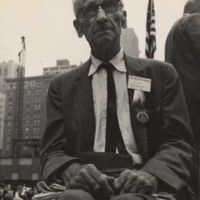 During the mid-1960s, the Fifth Avenue Vietnam Peace Parade organized dozens of local peace and anti-war groups in a series of anti-war parades, “peace-ins” and other events. Dave Dellinger, who would later gain notoriety as a member of the Chicago 7 during the 1968 Democratic Party Convention in Chicago, and Norma Becker, who worked for the War Resisters League, led the group.

A.J. Muste was born in the Netherlands in 1885 and emigrated to the United States in 1901, where his father was a factory worker at a plant in Michigan. Muste was ordained as a Dutch Reform minister in his young adulthood and moved to New York City with his wife and three children. There, he was introduced to liberal theology and pragmatism and joined the local chapter of the National Civil Liberties Union, which would later become the American Civil Liberties Union, and the Fellowship of Reconciliation, a pacifist organization formed in opposition to WWI by Muste, Jane Addams and Bishop Paul Jones. Muste’s stance against the war compelled his more conservative congregation to oust him.

Following his rejection by the church, Muste focused his peace and justice work on the political left. During the late-1910s and 1920s, Muste worked within the labor movement, famously leading striking textile workers in Lawrence, Massachusetts, and serving as the director of the Brookwood Labor College, a training school for the militant Congress of Industrial Organizations. In 1929, the more conservative American Federation of Labor accused Muste of being a communist, prompting him to found the Conference for Progressive Labor Action, a faction dedicated to organizing for militant industrial unionism. The CPLA ultimately evolved into the Trotskeyite, American Workers Party, which Muste led until a religious experience in 1936 prompted him to break with Marxist-Leninism and rededicate himself to Christian pacifism.

As national secretary of the Fellowship of Reconciliation, Muste dedicated himself to training a new generation in nonviolent direct action against racial segregation. He also published an important book, Nonviolence in an Aggressive World, in 1940. As the southern black freedom movement gained steam, Muste became an important adviser and ally to prominent advocates of non-violence, like Bayard Rustin and Martin Luther King, Jr.

During the post-WWII era, Muste was also focused on opposition to the Cold War and U.S. militarism. He continued to write and counseled draft and tax resistance to oppose those policies. In 1941 he said, “The problem after a war is the victor. He thinks he has just proved that war and violence pay. Who will now teach him a lesson?” Later, he argued, "We cannot have peace if we are only concerned with peace. War is not an accident. It is the logical outcome of a certain way of life. If we want to attack war, we have to attack that way of life. Disarmament cannot be achieved nor can the problem of war be resolved without being accompanied by profound changes in the economic order and the structure of society.” Muste helped form several organizations dedicated to militant nonviolence and the creation of a New Left.

As a new generation of young activists rose in opposition to the war in Vietnam, Muste gained a new following and influence. In an article in a 1965 issue of Liberation, titled, “Who Has the Spiritual Atom Bomb, he wrote, “It is said that if the United States were to stop shooting and withdraw its troops from Vietnam, the Viet Cong would then stage a great purge of the people who we have been seeking to protect — have pledged to protect. First of all, so far they have been getting precious little protection from us. The Vietnamese people as human individuals have been shot at by the French, by us, by Communists, by guerrillas for years. Maybe, if only somebody would stop shooting at them that would be something to the good.” In a 1967 New York Times article, “Debasing Dissent,” Muste was famously quoted, “There is no way to peace; peace is the way.” In defense of dissent, Muste wrote in 1967, shortly before his death, “There is a certain indolence in us, a wish not to be disturbed, which tempts us to think that when things are quiet, all is well. Subconsciously, we tend to give the preference to 'social peace,' though it be only apparent, because our lives and possessions seem then secure. Actually, human beings acquiesce too easily in evil conditions; they rebel far too little and too seldom. There is nothing noble about acquiescence in a cramped life or mere submission to superior force.” Muste played a central role in organizing the National Mobilization Committee to End the War in Vietnam. Muste died in 1967.