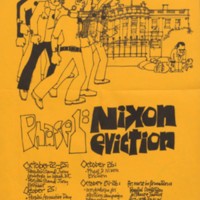 This poster publicized the "Phase 1" of the "Evict Nixon" campaign, which featured a demonstration in Washington, D.C., in August of 1971. An estimated 1,000-1,500 protesters listened to speakers and marched toward the White House. Around 300 were arrested by police during the march, including Milwaukee civil rights leader, Fr. James Groppi, and anti-war activist, Rennie Davis. After Mayday demonstrations the previous spring, police over-prepared for this demonstration putting 2,000 Guardsmen, 2,000 federal troops and 5,100 police on alert. They also rented the Kalorama Skating Rink to use for mass arrests. Demonstration leaders also participated in a phone call with NLF representatives in Paris. It was hoped that the demonstration would kick off a year of anti-Nixon activism that would lead to his ouster from the White House in 1972. In reality, Nixon won re-election in a landslide.