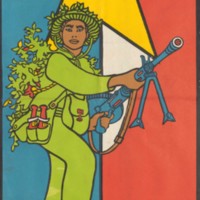 According to a 2015 article in Slate Magazine by Rebecca Onion, this poster was one of a set created by Cuban artist Felix René Mederos Pazos, "the product of a trip Mederos took to Vietnam in 1969, on assignment from the Cuban government's Department of Revolutionary Orientation.
Cuban artists often addressed international subjects, in alignment with the Cuban Revolution's political focus. (Other posters produced around this time expressed solidarity with anti-colonial guerrillas in Angola, Black Panthers in Watts, California, and the people of Hiroshima, Japan.) These Mederos posters repeated the slogan 'Como en Vietnam,' which was meant to encourage Cubans to emulate the resourcefulness of the North Vietnamese in their daily lives." Roz Payne travelled to Cuban during the 1960s-era as a part of the Venceremos Brigade.