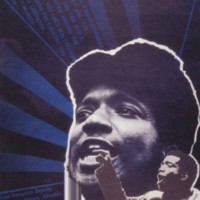 This poster, created by Black Panther Party Minister of Culture, Emory Douglas, ca. 1969, features Fred Hampton, leader of the Illinois Chapter of the Black Panther Party. Hampton was murdered by the FBI after a raid on Panther headquarters in Chicago on December 4, 1969. The poster includes two quotes. The quote at the top reads "You can jail a revolutionary/ but you can't jail the/ revolution. You can run a/ freedom fighter around the/ country but you can't run freedom/ fighting around the country. You/ can murder a liberator, / but you can't murder/ liberation." The second reads "Fred Hampton Deputy/ Chairman Illinois Chapter/ Black Panther Party/ Born August 30, 1948/ Murdered by Fascist Pigs/ Dec. 4, 1969."