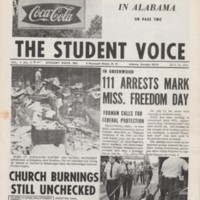 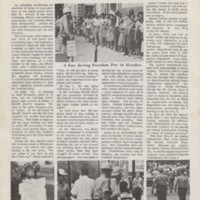 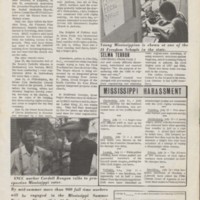 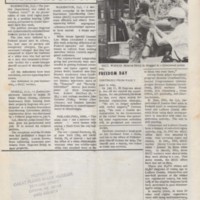 The Student Voice was the newspaper published by the Student Nonviolent Coordinating Committee's main office in Atlanta from 1960 to 1965. The independent paper emerged out of organizational disappointment at the coverage of the southern black freedom movement by the mainstream press. The goal of the newspaper was to improve communications within SNCC and publicize their members’ work, as well as to provide accurate coverage of the civil rights movement and to “present to northern supporters news which the press was not covering.” The paper, which was distributed largely on college campuses, was also an important tool to help raise funds for the organization. In this issue from July 1964, articles explore church burnings; arrests during the Mississippi Freedom Day protest and the Selma, Alabama, Freedom Day protests.