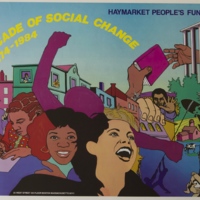 The Haymarket People's Fund is a philanthropic organization in Boston, Massachusetts, that funds grassroots efforts toward social justice.