Students of Norwalk - Beautify America - Get a Haircut 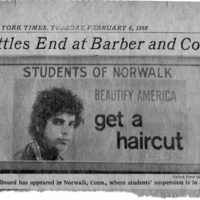 Students of Norwalk - Beautify America - Get a Haircut

One of the key themes of the 1960s was generational tension. Youth culture styles and fashion were a consistent target from various authorities, from parents, to media commentators, to law enforcement and school officials. Long hair on men became a particular point of contention. To some adults, long hair symbolized opposition to the War in Vietnam, or an acceptance of countercultural values, like drug use, premarital sex, and resistance to traditional authority. During the late-1960s, several school attempted to compel young white men to cut their hair. In 1968, for instance, the principle of a New Hampshire Catholic school marched 18 students from class to a local barbershop for a haircut. That same year, school officials at Brien McMahon High School in Norwalk, Connecticut, suspended 53 male students because their hair covered their ears or hung over their collars. They also restricted young women from wearing thigh-high mini-skirts. 18 male students complied, but others resisted, protesting outside the school with signs that read, “”It’s 1968, not 1984,” “Is Hair Unfair?” “Does Society Hang by a Hair?” and “Unconstitutional Harassment.” The ACLU represented four of the students in a court challenge, but lost. The school principle argued that long hair was a major classroom distraction, while the ACLU cited the Magna Carta and U.S. Constitution, claiming the restrictions violated fundamental individual rights and had nothing to do with education. The judge skirted the constitutional issues, justifying his decision by saying it would be unfair to the 18 students who complied with the order if he ruled for the four who refused to comply. In a separate 1970 case in Massachusetts, though, a judge sided with the students, writing, “We see no reason why decency, decorum and conduct require a boy to wear his hair short. Certainly eccentric hair styling is no longer a reliable sign of perverse behavior. We do not believe that mere unattractiveness in the eyes of some parents, teachers, or students, short of uncleanliness, can justify the proscription. Nor, finally, does such compelled conformity to conventional standards of appearance seem a justifiable part of the educational process.”

This slipping from the February 6, 1968, New York Times shows a billboard in Norwalk ridiculing long-haired youth.