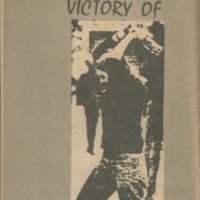 This leaflet image cites the Chinese victory over imperial Japan, leading to the Communist Revolution in China. Written in commemoration of Chinese Peoples’ War against Japan in 1945, this leaflet demonstrates the imagined community between U.S. students within the New Left and global Marxist revolutions.