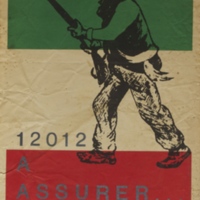 This poster promotes the Front de Liberation du Quebec, a radical separatist group within the broader Quebec sovereignty movement. The FLQ adhered to a Marxist-Leninist ideology and engaged in a number of violent paramilitary attacks between 1963 and 1970. A 1963 leaflet that was widely distributed in Montreal included the following inscription:

"Suicide-commandos of the Quebec Liberation Front have as their mission to completely destroy, by systematic sabotage:

1. "All the symbols and colonial institutions (federal), in particular the RCMP and the armed forces.

2. "All the information media of the colonial language (English) which holds us in contempt.

3. "All enterprises and commercial establishments which practice discrimination against Quebec people, which do not use French as their primary language, which have signs in the colonial language (English).

4. "All the factories that discriminate against French-speaking workers"

In general, FLQ members embraced “propaganda of the deed,” a term that referred to political action that was aimed at providing an example for other liberationist groups. The group issued a variety of statements that called for a socialist insurrection against oppressors they identified with "Anglo-Saxon" imperialism. They also encouraged the overthrow of the Quebec government, the independence of Quebec from Canada and the creation of a French-speaking "workers' society.” The FLQ enjoyed popularity among the broader global New Left.

FLQ violence reached its peak during the late-1960s with the bombing of the Montreal Stock Exchange in 1969 and what came to be known as the October Crisis on 1970, when the group kidnapped Canadian Trade Commissioner, James Cross, and later Labor Minister Pierre Laporte, who was then killed by a FLQ cell. The October Crisis led to a decline in support for the French separatist movement and a severe crackdown by the Canadian government. In total, the FLQ conducted at least 160 violent incidents during this period, resulting in property damage and the deaths of eight people and a number of other injuries. As support for the FLQ waned in Canada, a small number of members fled to Cuba.