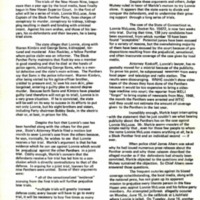 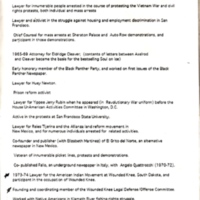 This newsletter provides an update on the legal proceedings against Lonnie McLucus and Warren Kimbro for the kidnapping, torture and murder of Alex Rackley, who they believed was an FBI informer. Some claimed the killing was ordered by Bobby Seale. McLucas was convicted and received a 15 year prison sentence. The men were a part of a group that was referred to as the New Haven Nine.