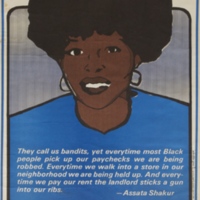 Assata Olugbala Shakur is a political activist, author, fugitive and aunt of hip-hop artist, Tupac Shakur. She was born in 1947 in New York City, JoAnne Deborah Byron. Following her parents’ divorce, Byron spent much of her childhood moving between her grandparents and other family in Wilmington, North Carolina, and New York City, where her mother moved after she remarried. As a student at the Borough of Manhattan Community College and then City College of New York, Byron was exposed to African American history and Black Nationalism, which made a significant impact on her political development. She met her husband, Louis Chesimard, and began participating in the student movement, anti-war activism and the struggle for black liberation. In 1970, while visiting Oakland, California, Byron met members of the Black Panther Party and joined the Harlem branch upon her return to New York, where she worked with the breakfast program. Frustrated with the Black Panther Party’s unwillingness to work with other black radical organizations, Byron left the party in 1971 and joined the Black Liberation Army, an underground Black Power group whose goal was to “take up arms for the liberation and self-determination of black people in the United States.”   In her autobiography, she wrote, “the Black Liberation Army was not a centralized, organized group with a common leadership and chain of command. Instead there were various organizations and collectives working together and simultaneously independent of each other.” The group believed "the character of reformism is based on unprincipled class collaboration with our enemy" and asserted the following principles:

1. That we are anti-capitalist, anti-imperialist, anti-racist, and anti-sexist.

2. That we must of necessity strive for the abolishment of these systems and for the institution of Socialistic relationships in which Black people have total and absolute control over their own destiny as a people.

3. That in order to abolish our systems of oppression, we must utilize the science of class struggle, develop this science as it relates to our unique national condition.

It was also at this time that Byron changed her name to Assata (“she who struggles”) Olugbala (“love for the people”) Shakur (“the thankful”).

In 1972, the FBI issued a warrant for Shakur’s arrest for alleged crimes committed by the BLA and was the subject of a multi-state manhunt by law-enforcement. During a traffic stop on the New Jersey Turnpike in 1973, Sundiata Acoli Zayd Malik Shakur and Assata Shakur got into an altercation with two police officers, Werner Foerster and James Harper. The incident resulted in the deaths of Zayd Shakur and Foerster. Harper and Assata Shakur were also wounded in the shoot-out. Over the next few years, beteen 1973 and 1977, Shakur was charged with a variety of crimes related to the 1973 incident and others, including murder, attempted murder, armed robbery, bank robbery and kidnapping. Six of the charged were ultimately dismissed, though she was convicted of Foerster’s murder and seven other felonies related to that incident in 1977 and sentenced to life in prison plus thirty years. Many black liberation and New Left activists argued that Shakur did not receive a fair trial. In 1979, three members of the BLA helped Shakur escape from prison. For the next few years, Shakur lived underground, ultimately fleeing the U.S. for Cuba in 1984, where she was reunited with her daughter, who had been born in prison while she was on trial. Shakur continues to live in Cuba and remains on the FBI’s list of “most wanted terrorists.”

The quotation printed on this poster is from a letter Shakur wrote on July 4, 1973 from prison. The full letter is here:


Black brothers, Black sisters, i want you to know that i love you and i hope that somewhere in your hearts you have love for me. My name is Assata Shakur (slave name joanne chesimard), and i am a revolutionary. A Black revolutionary. By that i mean that i have declared war on all forces that have raped our women, castrated our men, and kept our babies empty-bellied.

I have declared war on the rich who prosper on our poverty, the politicians who lie to us with smiling faces, and all the mindless, heart-less robots who protect them and their property.

I am a Black revolutionary, and, as such, i am a victim of all the wrath, hatred, and slander that amerika is capable of. Like all other Black revolutionaries, amerika is trying to lynch me.
I am a Black revolutionary woman, and because of this i have been charged with and accused of every alleged crime in which a woman was believed to have participated. The alleged crimes in which only men were supposedly involved, i have been accused of planning. They have plastered pictures alleged to be me in post offices, airports, hotels, police cars, subways, banks, television, and newspapers. They have offered over fifty thousand dollars in rewards for my capture and they have issued orders to shoot on sight and shoot to kill.

I am a Black revolutionary, and, by definition, that makes me a part of the Black Liberation Army. The pigs have used their newspapers and TVs to paint the Black Liberation Army as vicious, brutal, mad-dog criminals. They have called us gangsters and gun molls and have compared us to such characters as john dillinger and ma barker. It should be clear, it must be clear to anyone who can think, see, or hear, that we are the victims. The victims and not the criminals.

It should also be clear to us by now who the real criminals are. Nixon and his crime partners have murdered hundreds of Third World brothers and sisters in Vietnam, Cambodia, Mozambique, Angola, and South Africa. As was proved by Watergate, the top law enforcement officials in this country are a lying bunch of criminals. The president, two attorney generals, the head of the fbi, the head of the cia, and half the white house staff have been implicated in the Watergate crimes.

They call us murderers, but we did not murder Martin Luther King, Jr., Emmett Till, Medgar Evers, Malcolm X, George Jackson, Nat Turner, James Chaney, and countless others. We did not murder, by shooting in the back, sixteen-year-old Rita Lloyd, eleven-year-old Rickie Bodden, or ten-year-old Clifford Glover. They call us murderers, but we do not control or enforce a system of racism and oppression that systematically murders Black and Third World people.

Although Black people supposedly comprise about fifteen percent of the total amerikkkan population, at least sixty percent of murder victims are Black. For every pig that is killed in the so-called line of duty, there are at least fifty Black people murdered by the police.

Black life expectancy is much lower than white and they do their best to kill us before we are even born. We are burned alive in fire-trap tenements. Our brothers and sisters OD daily from heroin and methadone. Our babies die from lead poisoning. Millions of Black people have died as a result of indecent medical care. This is murder. But they have got the gall to call us murderers.

They call us kidnappers, yet Brother Clark Squires (who is accused, along with me, of murdering a new jersey state trooper) was kidnapped on April z, 1969, from our Black community and held on one million dollars' ransom in the New York Panther 21 conspiracy case. He was acquitted on May 13, 1971, along with all the others, of 156 counts of conspiracy by a jury that took less than two hours to deliberate. Brother Squires was innocent. Yet he was kidnapped from his community and family. Over two years of his life was stolen, but they call us kidnappers. We did not kidnap the thousands of Brothers and Sisters held captive in amerika's concentration camps. Ninety percent of the prison population in this country are Black and Third World people who can afford neither bail nor lawyers.

They call us thieves and bandits. They say we steal. But it was not we who stole millions of Black people from the continent of Africa. We were robbed of our language, of our Gods, of our culture, of our human dignity, of our labor, and of our lives. They call us thieves, yet it is not we who rip off billions of dollars every year through tax evasions, illegal price fixing, embezzlement, consumer fraud, bribes, kickbacks, and swindles. They call us bandits, yet every time most Black people pick up our paychecks we are being robbed. Every time we walk into a store in our neighborhood we are being held up. And every time we pay our rent the landlord sticks a gun into our ribs.

They call us thieves, but we did not rob and murder millions of Indians by ripping off their homeland, then call ourselves pioneers. They call us bandits, but it is not we who are robbing Africa, Asia, and Latin America of their natural resources and freedom while the people who live there are sick and starving. The rulers of this country and their flunkies have committed some of the most brutal, vicious crimes in history. They are the bandits. They are the murderers. And they should be treated as such. These maniacs are not fit to judge me, Clark, or any other Black person on trial in amerika. Black people should and, inevitably, must determine our destinies.

Every revolution in history has been accomplished by actions, al-though words are necessary. We must create shields that protect us and spears that penetrate our enemies. Black people must learn how to struggle by struggling. We must learn by our mistakes.

I want to apologize to you, my Black brothers and sisters, for being on the new jersey turnpike. I should have known better. The turnpike is a checkpoint where Black people are stopped, searched, harassed, and assaulted. Revolutionaries must never be in too much of a hurry or make careless decisions. He who runs when the sun is sleeping will stumble many times.

Every time a Black Freedom Fighter is murdered or captured, the pigs try to create the impression that they have quashed the movement, destroyed our forces, and put down the Black Revolution. The pigs also try to give the impression that five or ten guerrillas are responsible for every revolutionary action carried out in amerika. That is nonsense. That is absurd. Black revolutionaries do not drop from the moon. We are created by our conditions. Shaped by our oppression. We are being manufactured in droves in the ghetto streets, places like attica, san quentin, bedford hills, leavenworth, and sing sing. They are turning out thousands of us. Many jobless Black veterans and welfare mothers are joining our ranks. Brothers and sisters from all walks of life, who are tired of suffering passively, make up the BLA.

There is, and always will be, until every Black man, woman, and child is free, a Black Liberation Army. The main function of the Black Liberation Army at this time is to create good examples, to struggle for Black freedom, and to prepare for the future. We must defend ourselves and let no one disrespect us. We must gain our liberation by any means necessary.