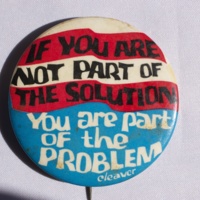 This button includes a quotation from Eldridge Cleaver, the controversial "Minister of Information" for the Black Panther Party. The quote, which became a popular slogan on the New Left in the late-1960s and early-1970s, is actually adapted from a longer statement by Cleaver: "There is no more neutrality in the world. You either have to be part of the solution, or you're going to be part of the problem." Cleaver, who edited the Black Panther Party newspaper, is credited with crafting a more radical and incendiary public rhetoric for the organization. His 1968 book, Soul On Ice, was a best-seller, simultaneously praised and condemned, and much-debated. Cleaver was the presidential candidate for the Peace & Freedom Party in 1968, earning .05% of the vote. Following a deadly altercation with Oakland police that same year, Cleaver fled the United States, first to Cuba, then to Algeria and ultimately France, before he returned to the United States in 1975. An ideological split between Cleaver and party co-founder, Huey Newton, led to Cleaver's ouster from the party. Following his exile, Eldridge Cleaver became a born-again Christian, dabbling in a variety of different denominations. He also participated in conservative politics through the Republican Party. Cleaver died in 1998.