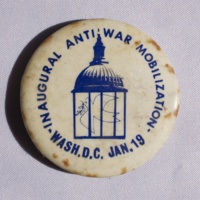 Following the 1972 presidential election, anti-war activists organized a protest in Washington, D.C. on January 19, 1973, during Richard M. Nixon's second inauguration ceremony. This button promoted that protest, which voiced opposition to President Nixon's expansion of the War in Vietnam despite his promises in 1968 to bring the war to an end.