Rat Subterranean News "Up Against the Wall" 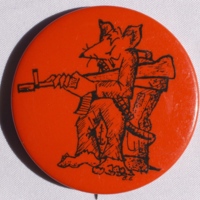 Rat Subterranean News "Up Against the Wall"

This button was created by Rat Subterranean News, the second of two major underground newspapers coming out of New York City and features the paper's mascot. Rat was published from 1968-1970. It gained notoriety for its reporting on the siege of Columbia in 1968, the take-over of SDS by the Weather Underground, the Panther 21 trial in New York, the take-over of Alcatraz Island by the American Indian Movement and early ecology reportage. Several Rat contributors were arrested after a series of non-lethal bombings of corporate offices and military targets in late-1969 and the newspaper was overtaken by radical feminists in 1970 because of its sexism. According to an FBI report on the underground newspaper written shortly after its founding, “Only a handful of the papers strike me as having a distinct character, useful, original material, and rich, imaginative writing… The paper, named after the small, tough, and durable rodent of the underground, defined itself in a first anniversary editorial last March as an ‘experiment in participatory journalism.’”