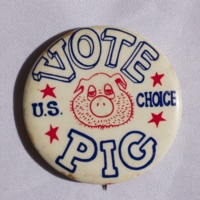 At the Democratic National Convention in Chicago in August 1968, as a part of the broader protest against the Democratic Party and the War in Vietnam, the Youth International Party, or Yippies, satirically nominated a pig - "Pigasus" - for U.S. president. Abbie Hoffman, Jerry Rubin, Dennis Dalrymple and other Yippie pranksters argued, with tongues firmly planted in cheeks, that Pigasus could "really bring home the pork" and "if we can't have him in the White House, we can have him for breakfast." The 1968 stunt typified the Yippies' absurdist, theatrical approach to protest, as well as their mix of New Left politics and counterculturalism.

Here, the campaign-style "Vote Pig" button serves as a humorous theatrical tool to critique the contemporary state of U.S. politics.