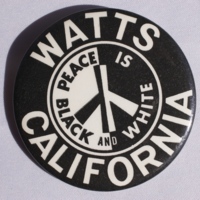 Taking place between August 11 and August 17, 1965, the Watts "riot," or "rebellion," in the predominately African American section of Los, Angeles, California, was a powerful response to police brutality, high unemployment, poor schooling and other inequalities plaguing the segregated inner-city neighborhood. The Watts disturbance was one of the largest urban racial disorders in American history, resulting in at least 34 deaths and more than $40M in property damage. It took more than 4,000 California Army National Guardsmen to finally restore order to the affected area. Over the next few years, between 1965 and 1968, dozens more U.S. cities experienced some form of racial disturbance. The McCone Commission, which was established in the wake of the Watts conflagration, issued a report suggesting a variety of solutions, including "emergency literacy and preschool programs, improved police-community ties, increased low-income housing, more job-training projects, upgraded health-care services, more efficient public transportation, and many more [programs]," but most of these and other recommendations were never acted upon.

While Watts is often associated with the more militant "Burn, Baby, Burn," slogan, this button, which includes a peace symbol and reads, “Watts California: Peace is Black and White," embodies a more inter-racial, or integrationist, spirit.