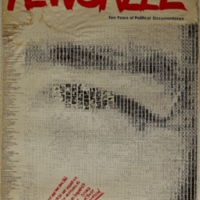 This poster promotes an exhibition of films by Newsreel Films at the Whitney Museum in New York City.

During the mid-2000s, Roz Payne wrote a brief essay on the early history of Newsreel Films:

"In 1967 a group of independent filmmakers, photographers, and media workers formed a collective to make political relevant films sharing our resources, skills, and equipment. As individuals we had been covering many of the events that we considered news, demonstrations, acts of resistance, and countless inequities and abuses. Sometimes films were made and some times not. Most often they were made too late and did not go to the people who could use them best.

We met in a basement in the lower eastside of New York and later at the alternate U, then more basements until we got an office. The only news we saw was on TV and we knew who owned the stations. We decided to make films that would show another side to the news. It was clear to us that the established forms of media were not going to approach those subjects which threaten their very existence.

I was a school teacher in New Jersey who shot photos. My marriage with Arnold Payne, Mr. Muscle Beach Jr. had broken up, I left a little house on the Palisades, overlooking the boats on the Hudson River right over the Spry sign across from 96th Street. I would sit looking at the burning windows of the NYC skyline as the sun set. That fire and the fire from a GI's Zippo lighter on the straw of a Vietnamese hut helped ignite me. I moved to New York City.

Walking down Second Ave and 10th Street with my camera one afternoon Melvin Margolis, a wild looking hippie stopped me and said, 'Hey, your a photographer and there's a meeting tonight of all the political film people. You have to go. It is very important. Make sure that you go. I'm not kidding.' I showed up that night, to the first meeting of Newsreel.

About 30 people met weekly to talk about films, equipment, and politics. I think we were great because we came from various political backgrounds and had different interests. We never all agreed on a political line. We broke down into smaller groups to work on the films. The working groups included anti-Vietnam-war, anti-imperialist, high school, students, women, workers, Yippies, Third World, and the infamous sex, drugs and party committee.

We wanted to make two films a month and get 12 prints of each film out to groups across the country. We wanted to spark the creation of similar news-film groups in other major cities of the United States so that they would distribute our films and would cover and shoot the events in their area.

The first film I worked on was the 1968 student take over of Columbia University. The students had taken over 5 buildings. We had a film team in each building. We were shooting from the inside while the rest of the press were outside. We participated in the political negotiations and discussions. Our cameras were used as weapons as well as recording the events. Melvin had a W.W.II cast iron steel Bell and Howell camera that could take the shock of breaking plate glass windows.

Newsreel worked to expand the awareness of events and situations relevant to shaping the movement. Our films tried to analyze, not just cover; they explored the realities that the media, as part of the system, always ignores.

In the 67 the FBI started the Counter-intelligence program to try to destroy African Americans, especially the Black Panther Party and the New Left. We worked with Third World groups. We produced various films that these groups could use to tell their stories and to use in organizing in their own communities and workplaces, hopefully serving as catalysis for social change.

Newsreel not only made films but we were among the first to distribute films made in Cuba, Vietnam, Africa, and the Middle East.

As Newsreel grew we spread out, opened offices and distribution centers across the country. We had offices in San Francisco, Detroit, Boston, Kansas, Los Angeles, Vermont, and Atlanta. We made films and distributed our films in the hope that the audiences who saw them would respond to the issues they raised. We wanted people to work with our films as catalysis for political discussions about social change in America and to relate the questions in the films to issues in their own communities.

We had many struggles in Newsreel around class, women, political education, cultural and worker politics, the haves and have nots. It was hard to hold to the correct political line. Little by little the groups changed from film-maker control to worker control, to women control, to third world control. Today, Third World Newsreel is in New York, California Newsreel is in San Francisco, and there is a Vermont Newsreel Archives.

In l972, myself and others moved to Vermont. We continue to distribute Newsreel films, shoot videos, use computer graphics, and maintain a film, photo, and document archive. With the easy accessibility of video cameras thousands of people are making their own documents to tell the stories of what is happening around them. I am shooting history of retired FBI agents that worked on Cointelpro against Don Cox, an exiled Black Panther and the white women who helped him. I teach History of the Sixties, Civil Rights Movement, Women, and Mycology at Burlington College."